Christie: Trump and Bush have “forgotten that this race is …not about them” 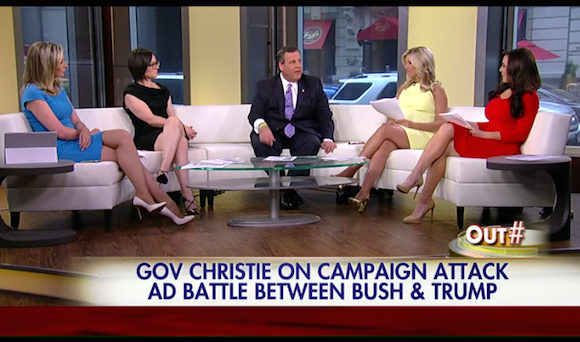 TANTAROS: Any thoughts on the back and forth between those two?CHRIS CHRISTIE: Listen, I think the problem is here that both these guys have forgotten that this race is about the American people and not about them. And that kind of personal stuff, back and forth, they’re making it about each other. This campaign is about how angry and frustrated the American people are that their government doesn’t work. About how angry they are about the fact that the immigration system isn’t enforced, how angry they are that the middle class wages have been stagnant for 15 years, how angry they are about all the student debt that’s been run up by their kids and then they can’t get a job.SMITH: But Donald Trump has engaged the American people some people who weren’t even or might not otherwise have been interested in this election with his rhetoric, with his enthusiasm, his passion. People like it.EARHARDT: On social media, he has millions of followers.CHRIS CHRISTIE: Well listen, Donald has engaged people when he has been talking about issues they care about. And I agree with you, he’s engaged people when he talks about issues they care about. They don’t care about that stuff. They don’t care about the back and forth between Jeb Bush and Donald Trump having a food fight between each other on personal issues and personal opinions.SMITH: It is entertaining though.CHRIS CHRISTIE: Well, I’m not saying I didn’t laugh about it. We all sat together on the set and watched the videos and laughed. But you asked me what I think of it. And what I think about it as a presidential candidate is, this is about the people of America and their frustrations and their anger and their aspirations for the future. It’s not about this.TANTAROS: So, if you’re going to fight back and forth—which, you tell it like it is—that is what you are known for no question. But you are also a former member of the Bush Administration. You have a lot of Bush people on your staff. So for the people watching what makes you different than Jeb Bush?CHRIS CHRISTIE: Well those are Christie people now, not Bush people.KENNEDY: Oh no you didn’t.TANTAROS: What’s the difference?CHRISTIE: The biggest difference is that I’ve actually done it in a state where it is difficult to do. First of all, Governor Bush hasn’t been involved in a campaign of any meaning since the turn of the century and has not been involved in the fights that we’ve been fighting has conservatives against the Obama administration over the last seven years. And as a governor in a state that has–the bluest state you can imagine, a Democratic Legislature, I’ve had to veto four hundred bills as Governor, more than any Governor in New Jersey History, every one of them has been sustained. Americans for Tax Reform just said I’ve vetoed more tax increases than any governor in American history. I’ve done this and gotten things done in New Jersey with a Democratic Legislature, that’s the difference. You know, if you have a Republican Legislature like Jeb had, and you send things down the hall, they rubber stamp it and send it back, I would give my left arm for one day like that. One day. So I’m fighting with a Democratic Legislature all the time, and that’s what people want a President to do with the Congress. They want him to go down, and whip that Congress into shape. Because even this Congress hasn’t done what they promised they would do.

EARHARDT: Now what about–is Trump giving the other candidates a run for their money, because he could sit in the back of his town car, or the back of his jet, and with a heavy hand, push a few buttons on his Twitter account, and he reaches millions of people, he really doesn’t even need negative ads because he can tweet something back if you say something about him, or Jeb says something about him, he can tweet something and it reaches millions of Millennials? Very interesting!

SMITH: Are you sick of answering questions about him?

CHRIS CHRISTIE: Of course! Of course I am. Wouldn’t you be? But you know, that’s what it is, you ask questions, I’m going to answer them. As Andrea said, I always answer the questions, and I tell it like it is, but the fact is, you know, he’s leading in the polls right now, good for him, congratulations, but if he continues to do that kind of stuff, and he and Jeb Bush continue to be poking each other in the eye, the American people are going to lose interest in that very quickly.

TANTAROS: You do deserve a lot of credit, I must say, for dealing with that Democratic Legislature in New Jersey, you vetoed a ton of bills, and I give you credit for that.