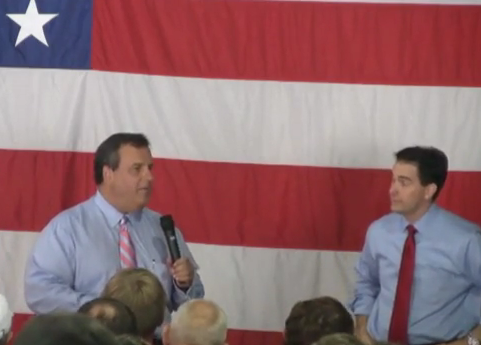 …which is hugely disappointing news for the Big Guy and his team if future polls reflect the same result, Save Jerseyans.

You can check out the complete results here.

He’s improved from 2% to 3%, a statistically insignificant change especially relative to the widely positive reviews his second debate performance received.

How did the other notables fare in this new national CNN/ORC poll? Our first poll since the last debate?

Rubio (+8) and Fiorina (+12) were the big winners, gaining significantly from an early September CNN/ORC poll. Trump (-8), Carson (-5), and Scott Walker (-5) were the biggest losers at least in terms of having lost the most raw support. Trump and Carson are still at the top of this thing, however, in 1st and 3rd place, respectively, but with Carly having moved into the 2nd place position, leading the frontrunner to do what he always does (but leaders never do) and blame someone else for the result.

Gov. Walker is undeniably the biggest loser at under 1%. He may very well now be the next domino to fall after Rick Perry’s withdraw earliest this month.

And therein lies one of this cycle’s most interesting facets, Save Jerseyans: experience isn’t just not helpful, but it’s actually a negative for a base that’s looking to nominate a new face. Look at the four leaders; only one (Rubio) is an elected official, but he’s a young one who hasn’t been in the U.S. Senate long with a face that certainly doesn’t age him up in most folks’ minds. So all of these hard-charging “blue” state governors like Bush, Christie, Walker, and Kasich who thought their resumes would take’em to the top of heap aren’t finding any validation for their assumption in the polls.

What does it all mean for Chris Christie? This is basically a donor Hunger Games. There’s a finite amount of establishment backing, and it’s currently spread out over multiple individuals. So perhaps Chris Christie could have a fighting change, however difficult, if the Donald implodes AND Christie out-lasts his gubernatorial rivals. The problem with that, as I’ve been saying for months, is that you never want your path(s) to victory almost wholly contingent on the fortunes of others.

9 thoughts on “First post-debate poll: Christie doesn’t get a bump and Walker flatlines”