OPINION: Ex-Im is “a tool for corporate welfare” 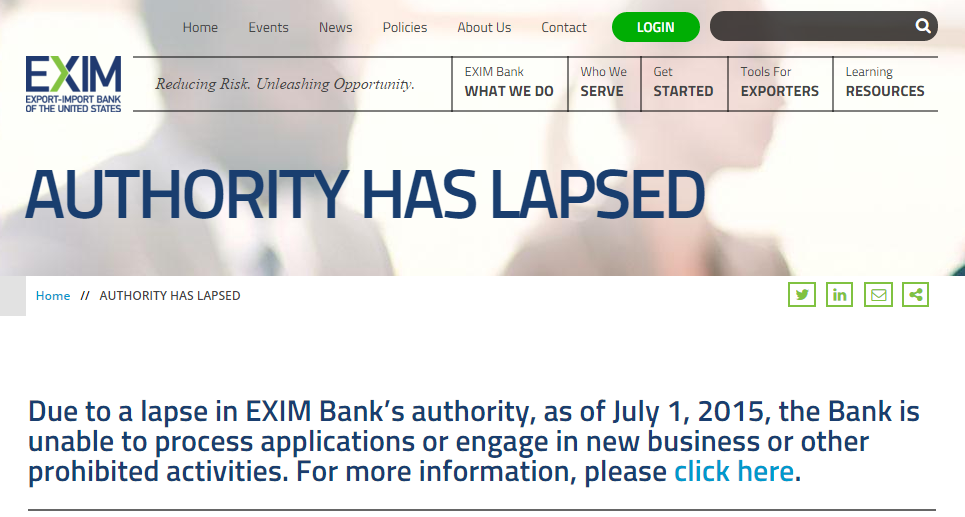 Should New Jersey politicians put the interests of big businesses and Washington lobbyists ahead of New Jersey taxpayers?

This is not a trick question. The answer is obvious to you and me, but apparently not to some of our representatives in the U.S. Congress. Republican Rep. Thomas MacArthur and Democratic Representatives Frank Pallone, Bonnie Watson Coleman, Albio Sires, Bill Pascrell, and Donald Norcross just decided to favor special interests by vowing to bring back the Export-Import Bank. They did so by signing a petition that forces the House of Representatives to vote on legislation to resuscitate the Export-Import Bank – a vote that will happen on October 26.

The Export-Import Bank (Ex-Im), a New Deal-era agency that Congress allowed to expire this summer, is little more than a tool for corporate welfare.

Ex-Im gives taxpayer dollars to companies, including foreign companies owned by foreign governments, so they can buy the products of a handful of politically connected American companies. About two-thirds of the bank’s funds benefit only ten large corporations that have tens of millions or even billions in annual profits. Unsurprisingly, these special interests have armies of lobbyists pressuring Congress to keep the taxpayer money flowing.

Yet if your company can’t lobby successfully for handouts from the Ex-Im Bank, you’re left at a disadvantage competing with companies that receive loans or loan guarantees from Uncle Sam.

Consider the impact on U.S. airlines like United, which has a major hub here in Newark. Unable to obtain the preferential deals on American planes that Ex-Im grants foreign airline companies, domestic carriers face an uneven playing field against foreign competitors. The Airline Pilots Association estimates that just two of Ex-Im’s airplane deals for foreign companies have cost the airline industry over 7,500 domestic jobs.

Keep in mind: That’s the result of only two deals in one industry. The Ex-Im Bank does hundreds of deals affecting hundreds of industries every year.

In each case, there’s a winner as well as a loser—and the taxpayer finances all of it. Even the federal government’s internal watchdog, the Government Accountability Office, has said that Ex-Im doesn’t create new jobs. It only shuffles existing ones around, losing taxpayer money along the way.

In the face of all this evidence, the bank’s backers still argue Ex-Im is necessary because it provides loans that private banks won’t. But think about the absurdity of that argument. Why should taxpayers have to shoulder risks that private companies won’t touch?

It turns out they’re smart to stay away. The Congressional Budget Office estimates that the Export-Import Bank will lose $2 billion over the next decade. This federal agency is gambling with our money—and losing some of it, too.

And of course, any story about Washington corporate welfare wouldn’t be complete without a corruption subplot. There have been nearly 800 fraud claims at the bank since 2007. Since 2009, 47 people have been convicted of defrauding the Ex-Im Bank, and dozens of investigations are still ongoing. Worst of all, one Ex-Im employee admitted earlier this year to taking nearly $80,000 in bribes from loan applicants.

New Jersey taxpayers don’t need a federal agency that encourages this kind of activity. That’s why Congress ended it earlier this year. Yet rather than keep the Export-Import Bank expired, six of our state’s representatives in Congress now want to resurrect it.

Maybe they’re listening to lobbyists instead of the New Jerseyans they represent. If they listened to us instead, they might hear us asking: Why are special interests more important than our interests?

Erica Jedynak is the director of Americans for Prosperity-New Jersey.

1 thought on “OPINION: Ex-Im is “a tool for corporate welfare””