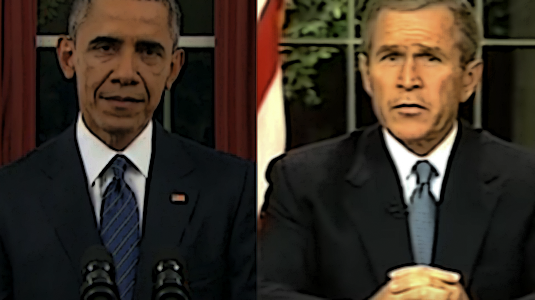 America has had presidents who rose to meet the challenge of their time (Lincoln, FDR, Reagan) and those who came up short (James Buchanan on the eve of the Civil War and Jimmy Carter prescribing sweaters come to mind).

And then there’s Barack Obama. The man exists in a category of his own, Save Jerseyans. Not a good one. 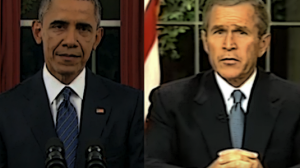 Speaking to the country on Sunday evening in a rare Oval Office televised address (you can check out the text here), the President purportedly sought to reassure Americans after last week’s terror attack in San Bernardino, California. His attempt would’ve been more effective, of course, if the President could admit to us, and himself, that it was in fact terrorism.

Keep in mind: this is the same man who bragged about a “decimated” Al Qaeda and dismissed the JV squad ISIS a couple of short years ago. The global was in terror was declared over in 2013. Then his own former intel chief subsequently admitted that the White House deliberately ignored the ISIS threat, one which the President said on Sunday night had “evolved” in recent years, all in order to guarantee reelection.

I guess it’s the closest we’ll get to hearing him admit that he lied but the Narrative is still more important than the truth to this creation of the Chicago political slime pool. Without blinking as the body count rose in real time in Cali, he summarily concluded that the culprit had to be the NRA – and refused to utter words like “Islamic” or “terrorism” – in the immediate aftermath of the San Bernardino attack.

For seven years, I’ve confronted this evolving threat each morning in my intelligence briefing. And since the day I took this office, I’ve authorized U.S. forces to take out terrorists abroad precisely because I know how real the danger is. As Commander-in-Chief, I have no greater responsibility than the security of the American people. As a father to two young daughters who are the most precious part of my life, I know that we see ourselves with friends and coworkers at a holiday party like the one in San Bernardino. I know we see our kids in the faces of the young people killed in Paris. And I know that after so much war, many Americans are asking whether we are confronted by a cancer that has no immediate cure.

All bullshit, folks, right down to the intelligence briefings “each morning” which, according to the public record, he missed more than 50% of the time during ISIS’s critical formative period.

Worse than the lie? His declaration that “[s]o far, we have no evidence that the killers were directed by a terrorist organization overseas, or that they were part of a broader conspiracy here at home,” as if that was some sort of comfort when we know, for a fact, that (1) the killers were tied to ISIS networks and (2) the nature of ISIS recruitment is such that there is no central directive but a fight-in-place strategy. ISIS doesn’t direct. It pollinates. This is what happens when a POTUS skips his own security briefings.

He couldn’t even get the visa of terrorist Tashfeen Malik right, forcing the Administration to issue a rare post-address correction.

Don’t even get me started again on the gun control ridiculousness. Like I said the other day: Barack Obama lied about ISIS, and ignored it, to get reelected. Now they’re here, in America, killing us BUT he’s blaming… the people who didn’t vote for him?

George W. Bush famously promised that “the people who knocked these buildings down will hear all of us soon!” after 9/11. He did NOT lecture Americans on tolerance or suggest a ban on box cutters. Dubya engaged the war, however imperfectly, one which Obama previously declared OVER (see above) but admitted on Sunday night has been ongoing “since al-Qaeda killed nearly 3,000 Americans on 9/11.”

Still want to blame Bush for our current predicament? Right….

So yeah, some presidents truly get it. Others don’t. Most fall somewhere in between. Barack Obama? It’s worse than all that. He either doesn’t understand the threat facing his country at even a rudimentary level or, arguably scarier still, he is so utterly and completely desperate to validate his own rigidly ideological, anti-imperialist, morally relativistic Leftist worldview that facts, and reality, no longer have any impact on him.

Pathetic isn’t strong enough of a word. Dangerous works just as well, too.