The key to equality? Quit collaborating with the forces of inequality! 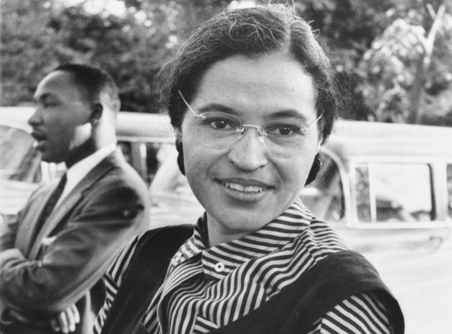 The millennial bedwetters and mouthbreathers combating microaggressions on campuses around the United States this fall semester don’t know what real hatred looks like, Save Jerseyans. They can’t imagine.

Sixty years ago, black men and women who had helped save the world from fascism one decade earlier were now fighting a new enemy on home soil: segregation. One member of this Greatest Generation was Rosa Parks who, on December 1, 1955 in Montgomery, Alabama, refused to surrender her bus seat to a white passenger. The rest, as they say, is history:

Rosa Parks was a heroine. Everyone knows that.

Liberals teasing conservatives for celebrating Parks’s historic accomplishment despite the fact that she was a Planned Parenthood board member at one point in her life, implying that there’s some kind of hypocrisy at work, are missing the point and making jackasses out of themselves in the process.

“The complexities of history and the reality of human weakness notwithstanding, these men and women, for all their many differences and limitations, were able by hard work and self- sacrifice – some at the cost of their lives – to build a better future,” remarked Pope Francis during his recent visit to Congress, honoring Rosa Parks’s friend and contemporary Martin Luther King, Jr. among other prominent Americans.

There are no perfect historical figures. Countless scores of individuals throughout this country’s history including Rosa Parks made a difference for humanity in spite of themselves. Welcome to humanity!

That does not mean, however, that it isn’t time for all Americans – and black Americans in particular – to revisit the uncomfortable question of whether these decades-old Leftist/Democrat coalition alliances have helped or hindered the cause of equality in opportunity. The #BlackLivesMatter movement and its ideological kin in the ‘safe space’ campus push represent just the latest attempts to simplify history and, in so doing, sanitize it to the harm of all.

The unvarnished truth? Planned Parenthood has exploited the black community by profiting off of butchering its young. Far more black children are killed every year by abortion than guns and the police combined.

And that’s only the beginning of the exploitation. Look at who Planned Parenthood and similar groups donate to. If you visit a Camden, New Jersey neighborhood in 2015, Save Jerseyans, you’ll find more poverty, dislocation, family strife and yes, segregation, especially in the school system, then even the late Daniel Patrick Moynihan could’ve imagined possible back in the 60s.

Yes, the Republican Party stinks at reaching out and starting conversations. Not everyone is as honest as Save Jersey‘s bloggers. Years of running from an unjustly-applied racist label by the culture and its media collaborators will do that. It’s turned into a complex. But the Democrat Party’s record on civil rights is far worse, and if we’re ever going to achieve an America where the color of one’s skin in no way statistically correlates to an economic outcome, then the first move towards kick starting a new dialogue needs to come from folks of good faith inside these used and abused communities.

We don’t need more hashtags and hashtaggers, whiners and pseudo-intellects who are ruled by anger.

We DO need a new generation of Civil Rights-era heroes and heroines willing to take on the status quo in these neighborhoods with a positive, empowerment-oriented approach designed to demand real political change from the bottom on up. Forget about voting Republican in federal elections; I’m not fishing for converts. What I want you to do is imagine how much would change overnight, right here in New Jersey, if half of the citizens of Camden started voting Republican in the 2017 legislative elections? Both parties would be transformed – for the better! – instantaneously, and you’d no longer have a political system that took our society’s most imperiled citizens for granted.

So is the next Rosa Parks out there as I write this, Save Jerseyans? I believe it. We have to believe it. If not, then there’s no hope for tomorrow. I’m not ready to give up that easily. There are too many people who deserve better. The next, new civil rights movement is just waiting for a leader.

1 thought on “The key to equality? Quit collaborating with the forces of inequality!”