POLL: The Holy See or the Donald? 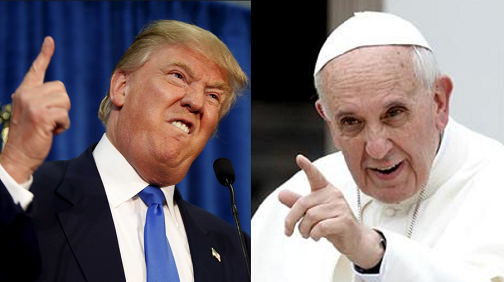 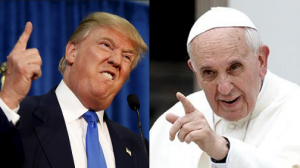 This is a hell of a situation for an old(er) altar boy to find himself in, Save Jerseyans.

Lord know that I loathe the Donald. Regular readers know this! And I will always feel some sense of fealty – even if it’s only sentimental in nature – to the Holy See. But when Pope Francis, a guy whose political views rival those of his communist buddies the Castro Brothers, has the nerve to impugn Donald Trump‘s Christianity for asserting American sovereignty?

Give me a break! I almost thought it was an Onion post when I first read the Pope’s comments. They’re THAT hypocritical, and the Vatican’s impressive defensive walls (!) are only one reason why.

“The Mexican government and its leadership has made many disparaging remarks about me to the Pope, because they want to continue to rip off the United States, both on trade and at the border, and they understand I am totally wise to them,” the GOP front runner responded via Facebook. “The Pope only heard one side of the story – he didn’t see the crime, the drug trafficking and the negative economic impact the current policies have on the United States. He doesn’t see how Mexican leadership is outsmarting President Obama and our leadership in every aspect of negotiation.”

There are plenty of reasons to question Donald Trump’s character. This ain’t it. The Pope needs to do some soul searching of his own, read a freakin’ history book, and start taking on the prime villains of our time (Communist Cuba/China, Islamic terrorists, a certain Russian tyrant, etc.) and stay out of American electoral politics…

And by the way? He might’ve just cement Trump’s South Carolina win since he and Senator Ted Cruz are presently engaged in a full-on pissing contest over immigration (among other issues) down there.

So thanks for nothing, Holy Father. Not helpful.

But that’s just me. I want your take:

4 thoughts on “POLL: The Holy See or the Donald?”