A Pussy Riot in Asbury Park 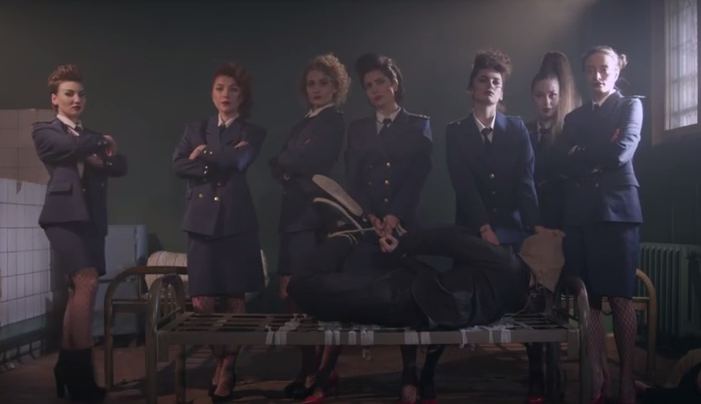 A friend once told me that he snot-chuckles like a 14 year old boy whenever he hears the name of the Russian female protest collective Pussy Riot.   That’s culturally understandable.

Don’t mistake though the seriousness of these women and the issues that surround them.  They are making a fascinating imprint on modern politics, power and protest.

On February 24 the House of Independents, Asbury Park’s new venue that is giving that City the artistic aesthetic it always pretended to have, is presenting “A Conversation with Pussy Riot:  Hosted by John Cameron Mitchell.”

To get a proper perspective of Pussy Riot, you have to realign your point of view from American to Russian when dealing with political terms.  It also helps to look at what they aren’t as much as what they are.

They aren’t a band, at least not in the traditional sense.   There’s music, but it’s not their focus.  It’s not even good music, probably by their own intention.  The music is beside the point of their varied socio-political messages.

They are a protest collective of no one really knows how many women, somewhere around a dozen, aged in their 20s.  They remain personally anonymous, so they wear on their heads colorful balaclavas, which appear like homemade Mexican wrestling masks.

So very “institution averse” was Pussy Riot at its inception in 2011, they would never actually book shows, sell tickets, sell music or offer swag.   Instead, they were guerilla performers.   They would take over Russian public spaces and hope it was illegal where they did.  They would spontaneously start to play, interrupting whatever is normally going on with their lyrical protest, then leave when run off or arrested.

They’ve claimed varied issues, but the one they’ve mainly focused their rage upon is Russian President Vladimir Putin.

For a moment, shed your American, 1st Amendment protected, oft taken for granted right of free speech, and consider the unreserved bravery of these women, throwing public beat-downs of Putin in Russia; in Russia, where Putin’s enemies are killed in public; in Russia, where journalists adverse to Putin suddenly die; in Russia, where beatings by the law are common with arrest.

There are things I don’t like about Pussy Riot, but I praise them in their political opposition to Putin, and I honor them, even envy them, in their bravery by taunting Putin in the Russian public square.  In this, they are Homeric.

But we come now to our first problem with Pussy Riot.  They don’t want to push Putin to a classically liberal place to join western civilization.  The women of Pussy Riot are proclaimed Trotskyites.  They hope to pull Putin back toward the Communist teachings of Lenin.  Good grief.

This is the tip of the iceberg when it comes to their unlearned political philosophy, which perhaps can be ascribed to their lack of experience, age or education.   Here are their political positions, according to co-founder Nadia Tolokonnikova:

Pussy Riot is “part of the global anti-capitalist movement, which consists of anarchists, Trotskyites, feminists and autonomists.”

Ha! That’s the alpha and omega of the human political noosphere, revealing Pussy Riot’s lack of sophistication.  The German rooted trot and the Italian influenced autonomist would immediately go to war while the anarchist would kill them both.  The feminist wouldn’t fare well standing with any of them.

Yet this naivety I can excuse to support Pussy Riot versus Putin.   No mortal messenger has been unflawed.   Agreements can be made with the enemy of my enemy:  Churchill praised Mussolini for opposing the Communists, Roosevelt stood with the Communists to defeat the Fascist Hitler.

Pussy Riot gained worldwide attention when they entered the Cathedral of Christ the Savior Church and invaded the alter to sing, “Mother of God, Drive Putin Away,” complete with dirty words that shocked the believers.  Members Nadia Tolokonnikova, Maria Alyokhina and Yekaterina Samutsevich were charged with “hooliganism.” After Putin spoke out against them, the world was shocked by their 2 year sentences to a penal colony.

When you do that in a Church you risk interpretations of sacrilege and blasphemy, but on closer inspection they didn’t seem to be protesting religion.  They were protesting a too cozy relationship between the Church and Putin.

On the one hand I can get with a protest of the Church if they are bowing to Putin. However, that church did get the holy wine kicked out of them under the Commies for decades, with more than a thousand priests put to death. Since Putin is a vestigial appendage of the Soviets with apparent powers of regeneration to those old brutal forms, could it be that the Church feels safety in being nice to him? Almost like a dog that’s been beat too much yet still licks his master’s face?

On the other hand, I hate disruptive protests. Hate them. I don’t mind so much when they set up in public spaces, but stay out of the church with your potty mouths. Yet I would have preferred a warning or a fine for trespass at most; not two years of forced labor.

There is always an issue surrounding a “Pussy Riot” appearance, about whether it is really Pussy Riot.  When the 3 women were arrested, their balaclavas were removed and anonymity destroyed.  A few weird things then happened.  First, Nadia’s husband tried to trademark the name Pussy Riot.  The anti-establishment, anti-capitalist collective were incensed at the nod to conformity, and they hate ticket sales.   When released from prison, Nadia and Maria turned their attention to prison abuses to the exclusion of other issues.

In Asbury Park will be Maria Alyokhina, one of the once jailed members, and she is the real deal.  She will likely give a strong dose of prison abuse complaints, and that’s worth hearing so I strongly encourage attendance.  It’s not just a Russian thing.  In America, we have the dirty little secret of privately owned prisons, which of course led to a Judge taking bribes to send 2000 children to jail for tiny, nothing offenses so the jail owners could get more government money.  Angry? Me too.  I wish some American women would don wrestling masks and blast a protest song on the White House lawn.  They won’t risk 2 years of forced labor like Maria.

I leave you with the latest song from Pussy Riot called Chaika, which beats up on Russian Prosecutor General Yuri Chaika (damn these women are brave).

And I won’t hold back my ingrained, knuckle-dragging male privilege, even at the risk of angering the radical feminist, ant-authoritarian, tear down the male-dominated world of Pussy Riot, by noting that front-woman Nadia Tolokonnikova is one luscious shot of vodka:

Tommy De Seno is an attorney, a journalist and a contributor to the website Ricochet.com

1 thought on “A Pussy Riot in Asbury Park”