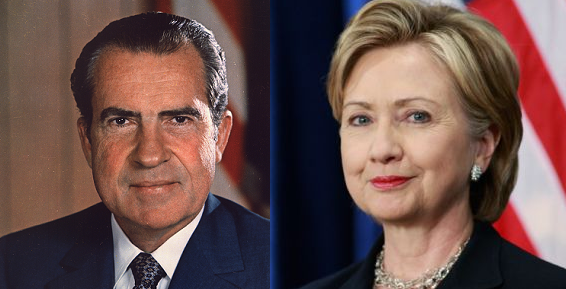 Even after nearly half a century, the similarities remain striking.

Both made their way to national prominence on the backs of others.

Always somewhat in the shadow of their popular benefactors, both found themselves socially challenged and unable to develop strong, likable identities of their own.

Though both saw themselves as superior to others, both suffered from insecurities that led them to blame their periodic setbacks on vast, mysterious conspiracies.

Both were chamelion-like, reinventing themselves to fit changimg circumstances, locations and times.

Periodically, both aspired to and/or accepted lesser positions in the hope that they would still one day rule the world.

Both warred with the media and found themselves reviled and even hated.

Both sacrificed whatever true identities or core principles they had in the quest for power.

And while the public wearied of both, neither ceded power willingly.

Of course, we’re talking about Richard Nixon and Hillary Clinton.

No one would even know the name “Hillary” had it not been for Bill Clinton. Hillary welded her reputation, her livelihood, her future to Bill Clinton and there she remains. As for Nixon, he was the boy wonder of the U. S. Senate who latched on to Dwight D. Eisenhower and became his running mate even as Ike wondered why he picked Nixon in the first place.

No, Hillary was never Bill’s vice-president but she often acted like she was. Still, she utterly failed at the one task her husband charged her with — making nationalized health care a reality. As for Nixon, Ike was once asked what he had accomplished as Veep. Stumped, the former five-star General of the Army told the media that, if given a few days, he might think of something. He never did.

Nixon had his Checkers scandal and the infamous Watergate affair. On the ropes, he cried poor, bemoaned the fact that his wife wore a plain cloth coat and told the media: “You won’t have Nixon to kick around anymore.” Hillary had her Whitewater, Travelgate and Benghazi scandals. When pressed, she blamed a “vast rightwing conspiracy,” denigrated housewives who sat at home “baking cookies” and later cried that she and Bill were “dead broke” when they left the White House.

Both Nixon and Hillary were defeated in quests for the presidency and sought lesser offices, biding their time until new opportunities emerged.

Both abandoned their home bases and reinvented themselves in New York City, basking in the power, fame and Big Money of the Big Apple. Nixon became a hotshot Wall Street lawyer. Hillary became New York’s senator and the beneficiary of big time Wall Street bucks. Both made lucrative deals for personal apperances, speeches and windy memoirs.

Nixon said he had a plan to get American out of Vietnam. He called it “peace with honor” but he never actually detailed exactly what the plan was. Hillary says she’s “fighting for us” and has a plan to save the middle class, put Americans back to work and secure our future. But nobody’s quite sure what that plan is or how it will work.

Nixon was so paranoiac he taped all his conversations in the oval office. As Secretary of State, Hillary was so suspicious of others (even the administration she served) that she went so far as to jeopardize national security by maintaining a private e-mail account with her own private server. The tapes proved to be Nixon’s undoing. The e-mails may spell the same future for Hillary.

But don’t be so sure.

Remember, voters knew about Nixon’s numerous erroneous zones before selecting him twice as vice-president and twice as president.

In fact, people knew about the Watergate break in even before they overwhelmingly re-elected Nixon as President of the United States in 1968.

We knew all these things.

And we pretty much know these things about Hillary Clinton as well.

Like Nixon, Hillary comes to us as seriously damaged goods.

Will we make the same mistake again?

2 thoughts on “The Striking Similarities, Even Fifty Years Later”