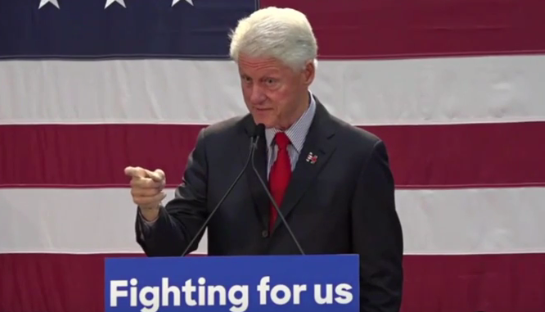 Former President Bill Clinton visited Passaic County Community College on Friday and fought off a heckler who challenged him to explain “[w]hy did you put more people in prison?” referring to the elder president’s 1990s criminal sentencing legislation.

“Did you know that? I bet you didn’t,” Clinton shot back, citing the bill’s less controversial provisions including an exemption for first-time drug offenders

“We could not pass that bill without the higher sentencing. More than a year ago, I went to the NAACP and I said that the sentencing laws were way overdone and we needed to lower them,” Clinton continued:

With the June 7th primary closing quick, Clinton concluded his remarks by reminding the 500+ assembled supporters that he hadn’t sewn up his own Democrat nomination back in 1992 until New Jersey and California weighed in.

“We need New Jersey. Hillary needs you in New Jersey. Don’t believe that just because it is the last day it doesn’t matter,” Clinton added. “You are just this close but you have the make the right decision and you have the most gifted change-maker I have ever seen.”

Both Hillary Clinton and her rival, Bernie Sanders, have both visited New Jersey for May rallies.