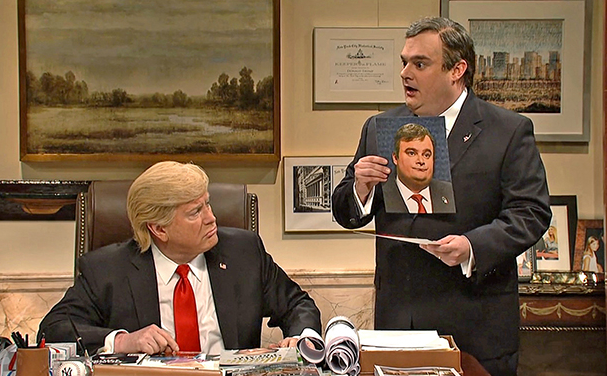 Darrell Hammond and Bobby Moynihan reunited on SNL this past weekend, Save Jerseyans, and as one might expect, the legendary comedy program wasn’t kind to Chris Christie’s new role in the Trumpverse:

Meanwhile, not long after the episode aired, the real Donald Trump took to Twitter to set the record straight about his veep search by slamming a WashPo speculative piece:

The @washingtonpost report on potential VP candidates is wrong. Marco Rubio and most others mentioned are NOT under consideration.

Rubio recently told CNN’s Jake Tapper that Trump should go with someone who will “agree with him on his issues,” inferring that the Florida Senator himself doesn’t believe he’s a good fit.

“He’s the presumptive nominee at this point but he’d be best served by having someone, not just, by the way, a vice presidential nominee, but active surrogates who agree with him on his issues,” Rubio told Tapper. “My differences with Donald, both my reservations about his campaign and my policy differences with him are well-documented.”
______