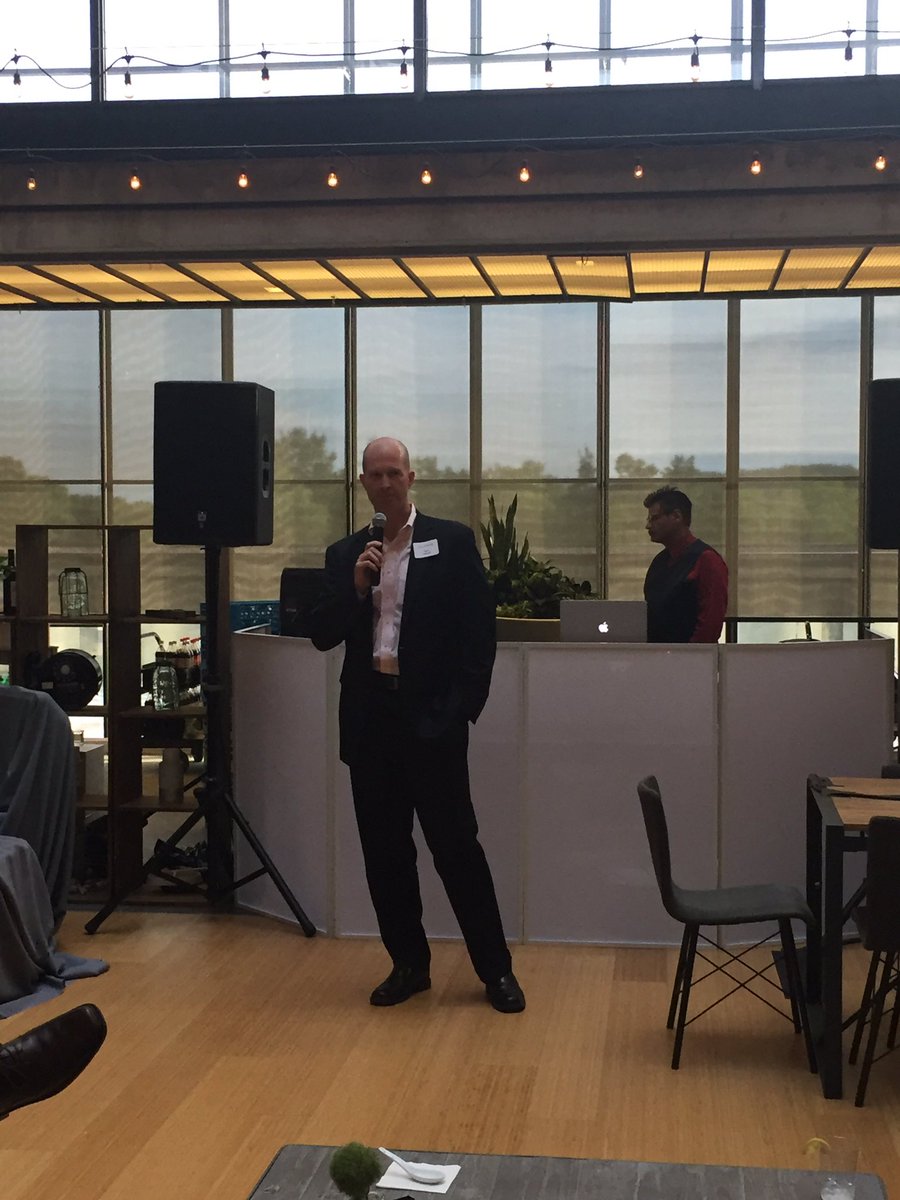 “If there’s to be a Republican Party in New Jersey, then let it begin here,” said an attendee at the SolutionsNJ SuperPAC organizing soiree. The Thursday event held at the iconic Bell Works Complex in Holmdel drew 275-300 people not so much to hear speeches – there were two, and they were thankfully short – but to network and learn how New Jersey Republicans can get out of the electoral slump they’ve been mired in for decades.

Headed up by GOP young-lion campaign and communications consultants Chris Russell and Rick Rosenberg, who served as event co-chairs, SolutionsNJ is proclaims its mission to be, “(To) elect common sense conservative candidates who will implement policies that promote economic opportunity, individual freedom, educational empowerment and fiscal responsibility.”

That’s a tall order in a state that, in 2015, bucked the national trend  of state legislatures and governor’s mansions going increasingly Republican by seeing several incumbent GOP assemblymen and women tossed out of office, some by the slimmest of margins, to increase the Democratic stranglehold on that body with its largest majority since 1979.

To a person, those at the event who were asked why New Jersey went left while the country went right said, “Money – Democratic SuperPAC money.”

Per one in attendance, “We’re getting creamed on the money front, and this is an effort to level that playing field.”

Despite the 2015 legislative races having the lowest general election turnout in state history at a scant 22 percent, New Jersey saw record setting campaign expenditures driven primarily by SuperPACs. Two Democratic-leaning ones, Washington, D.C.-based General Majority PAC and the New Jersey Education Association’s Garden State Forward PAC, were especially forceful in throwing their monetary weight around with the former coughing up nearly $6 million and the latter nearly $4 million with much of the cash overlapping from one to another.

ials unable to react and struggling to respond to incessant attacks on themselves, their candidates and their party. That presidential-campaign-focused Gov. Chris Christie didn’t lend a hand was also a factor.

Without question, General Majority’s presence, oft time with shady, if not outright lying, advertising, was a determinative factor in several of the Assembly races, especially in legislative districts 1, 2 and 11.

As Mercury astronaut Gus Grissom said in the movie The Right Stuff, “No Bucks, no Buck Rogers. “ (He didn’t say it in real life, though he should have.)  Couple that with what long-time California political mover and shaker Jesse Unruh famously said, about money being the mother’s milk of politics and you have the formula: If you want to elect candidates who will make a difference, you won’t do it with good intentions and kind wishes – it takes dough.

And event co-chair Rosenberg made no bones about. “We exist and we’re here to raise money,” he said.

His words were echoed in remarks co-chair Russell made to the assembled throng when he said, “This is about raising money.”

“Political candidates have to put their lives on the line,” Russell said, because every minute detail of their lives is under scrutiny. Well-funded efforts must be in place to support their efforts.

Russell noted how the venue for the event, the Bell Complex, was once the home of Bell Labs, a thriving hot bed of private sector innovation, Nobel Prize-winning ideas and technologies we take for granted today. A modern, re-energized New Jersey Republican Party must be the same, he said. Bright young minds filled with real-world solutions that make a positive difference in the lives of people – these are the people NJSolutions looks to support.

When asked what they expected from the event, Rosenberg said, “It’s all brand new. Everything is being done for the first time, so we’ll have to wait and see.”

Judging by the enthusiasm of the mostly younger-demographic crowd – the more whiskered attendees congregated around the two hosted bars – nearly half of whom were women, NJSolutions is off to a promising start.

The event saw a number of local elected officials and a few legislators – go here for a complete rogue’s gallery listing of the who’s who – but most who turned out were those on the bottom few rungs of the ladder looking to climb up.

Standing back to watch the crowd, it was obvious that they were here for a purpose, not just to get out of the house on a Thursday night for free food and drink. Seth Grossman of LibertyandProsperity.org and state Sen. Tom Kean, Jr. were seen energetically engaged in an intense conversation about redistricting and, of course, the gas tax, while Greg Quinlan of the Center for Garden State Families buttonholed everyone he could to bend their ears on – surprise! – the hated gas tax.

Meanwhile, Aaron Harrison, editor of the Jersey Conservative blog, took careful note of those in attendance because he’s making a list, and he’ll be checking it twice.

Almost everyone in attendance interviewed for this piece asked to remain off the record, and for good reason. Some entrenched interests in New Jersey Republican politics might see NJSolutions as an insurgent effort designed to supplant them. Without exception, ordinary attendees who were asked whether the PAC effort should be seen as a threat to what some in the state regard as a stodgy political establishment of well-entrenched, powerful political operatives and county chairs responded with slight squirms and non-committal looks. Nobody wanted to go there on the record.

But there was a palpable sense of frustration among many. “We’ve given up looking to the top for leadership,” said a 30-something attendee. 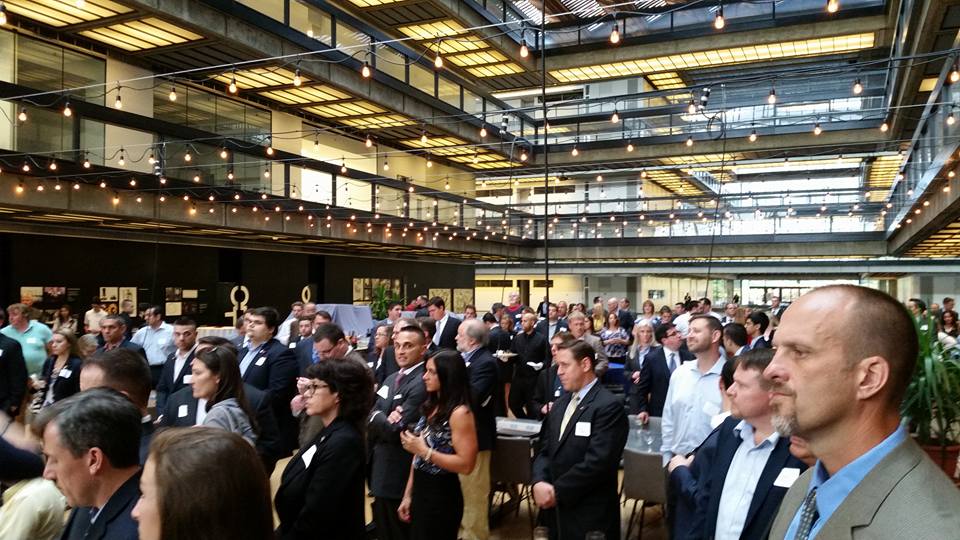 Another compared many in the Legislature who have the attitude that they’re content to remain in second place so long as they’re secure in their second-place seats to the perpetual-minority-complacency of Republicans in the House of Representatives under then-Minority Leader Bob Michel who was number two but not trying harder from 1981-1995 until Newt Gingrich and Dick Armey came along with a more confrontational style and the innovative Contract With America. Seeing the handwriting on the wall, Michel opted not to run for re-election in 1994, while Gingrich, Armey and House Republicans went on to a sweeping victory that year to take control of Congress.

That kind of innovation and outside-the-box thinking combined with a well-funded Republican effort and a party that is constantly on the offensive and never conceding defeat on key policy issues – don’t even for a second suggest that raising Jersey’s gas tax is a good idea to these people –  that seemed to be what the crowd hungered for.

While proclaiming that changing the system isn’t realistically possible, the pervading sense of frustration, impatience, disappointment at consistently poor results – the most frequently used word from several who were asked who they felt about the status quo was “pissed” – indicated that younger Republicans are looking to create a big stir. Lead, follow or get out of the way.

One wag put it, “We want to put a little political Viagra in the mix.”

As we’ve seen on the national political scene, when a stodgy establishment meets those intent upon creating a big stir, interesting things happen.

What’s next remains to be seen. Event organizers declined to speculate how much money would eventually be raised from the evening’s event – that wasn’t the immediate point because they’re in it for the long haul, one said.

But at least they have a plan and a vision, both of which have been sorely lacking in the state for far too long. Whether they can implement the plan and realize the vision is up to them since a good follow through is necessary to make good intentions fruitful.