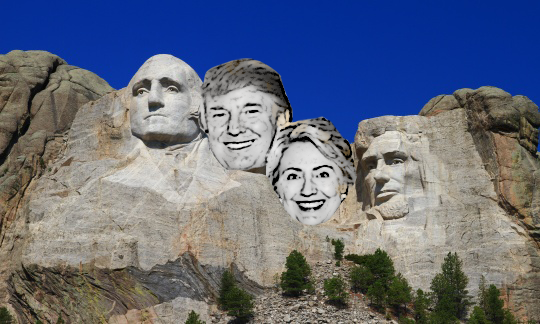 When Save Jersey‘s Matt Rooney wrote about America hating 2016 earlier this summer, Save Jerseyans, he wasn’t kidding.

That opinion also seems to be solidifying as Labor Day — the unofficial end of summer — rapidly draws near.

On Monday, the New Jersey-based Monmouth University Polling Institute released its latest national results which lean Hillary but highlight the weaknesses of both major party candidates.

“The number of voters who cannot bring themselves to voice a positive opinion of either presidential nominee is more than three times higher than in any other election in recent memory.  This is unprecedented,” explained Patrick Murray, Monmouth’s revered pollster-in-chief.

The numbers: 46% of likely voters back Clinton as opposed to 39% supporting Trump (Libertarian Gary Johnson snatches 7% while Green Jill Stein nabs 2%).  Support among all registered voters? 43% Clinton, 36% Trump, 8% Johnson, and 2% Stein.  That’s a slight improvement for Trump (Clinton led 50% to 37% among likely voters and 46% to 34% among registered voters after the DNC).

That means only 2% of those polled hold a favorable opinion of both candidates.

It’s a race to the bottom….