Women don’t love Hillary (and she knows it) 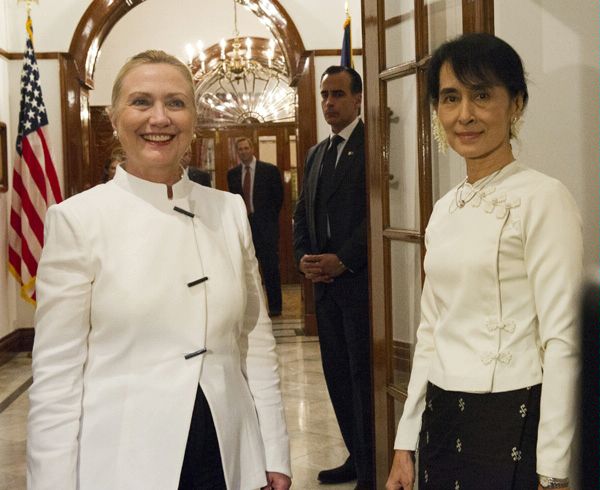 In a recent op-ed penned for the women’s fashion and style website Refinery29, Hillary Clinton attempted to connect with young women by letting them know that she “sees” them.

Second, the reality of the situation is that she doesn’t see past the tip of her ever-growing lying grandma nose.

For most of her adult life, Hillary Clinton sat atop a mountain in a glass house, collecting a government paycheck (or one leveraged through her political power), looking down upon the rest of us:

So, I want you to know that I see you.

I see you making the drive to a clinic 200 miles away.

I see you dropping your daughter off at daycare so you can make it to class on time.

I see you making the case to your boss for a long-overdue raise, even though you may worry about speaking up for what you deserve.

I see the difference you’re making in the world, in your own lives, and in the lives of the people you love.

And if I have the opportunity, I’ll do whatever I can to make things a little easier for you.

Yeah, she “sees you” alright….

Despite all the media hoo-ha that women are excited for the potential to have someone with a vagina making decisions in the White House, Hillary is not garnering tons of enthusiasm for what could be another historic American presidency.

Pantsuits aside, the reality is she is just not likeable and her attempt at connecting with young women in her Refinery29 piece falls short.

It goes without saying that young Republican women don’t like her. She doesn’t represent us. Her policy positions are detestable. From threatening our Second Amendment rights to rejecting the success of school choice in favor of the failed status quo in public education, to being in the bloody back pockets of Planned Parenthood pushing abortion on demand up until birth, we’ve got reasons to dislike her, or at least to believe that ideology (and personal advancement) are her primary motivators.

Not “seeing” us. Whatever that means.

But if our ideological differences with her aren’t sufficient, we find her personally deplorable as well. She is un-relatable even when she tries her hardest. She comes off as phony, mostly because she is — especially when she puts on her “southern black” accent. Republican women see right through her. Many independent and Democrat women do, too.

Granted, she is presently performing better among Democrat and independent women than her opponent Donald Trump in public polling; however, if you look closer, they are not overly excited about her candidacy, either. It’s soft support. Hillary’s weird overtures evidence the fact that she obviously realizes her female base is weak or she wouldn’t be pleading with them to firm up support.

It’s pretty bad when progressives/feminists/whatever the latest cool terms are that define Leftists feel like they need to make excuses and rationalize their dull support for her. That’s where we’re at all the same.

Over at Vox, to their credit, they readily admit some progressive feminist women are not overly enthused about a Hillary Clinton President for reasons ranging from her not focusing enough on advancing women of color…

Clinton represents, and directly benefited from, a mainstream feminist movement that has pushed women of color to the side time and again”

To her being “hopelessly moderate”…

Women who are not feminists, and many men, of her era find her crazy and radical and threatening and all of those things. But then when she’s with younger feminists who take the intersectionality critique much more seriously, they find her hopelessly moderate.”

I don’t pretend to understand the crazy that is the Left. Hillary Clinton is a lot of things, but moderate is not one of them (Just as an aside: this same Vox article lists free college, free healthcare and government child care as things that will help women become equal with men, while complaining that British women who lost government housing under Margret Thatcher lost their empowerment, ya know… because nothing says empowerment like living in government housing. *eye roll*).

But back to Hillary for the close, Save Jerseyans: you can’t deny that she has issues — yuge ones — when progressive and so-called moderate women in her own camp aren’t excited or when they feel like the only choice they have is a crappy one.