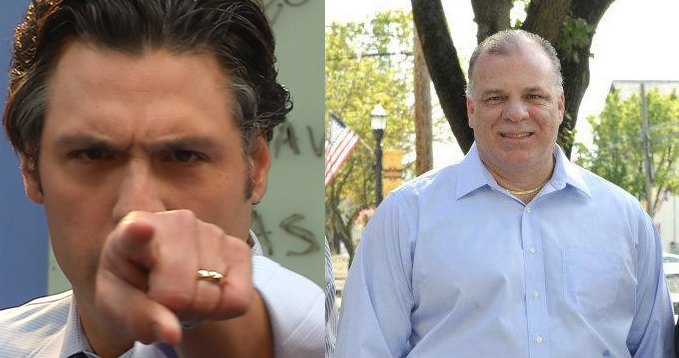 Cross-Posted with permission from Bill Spadea/NJ 101.5

It’s time to stand up to the corruption and mismanagement in New Jersey Government.  If you’re really are sick and tired of your taxes going up then stand with me in opposition to Question #2 on the Ballot this November 8th.  Governor Christie wants you to vote yes in order to dedicate the gas tax to the Transportation Trust Fund.  That might sound like a good idea at first…but the minute you dig a little deeper you see the real scam that will hurt all of us in New Jersey.

First of all, the TTF is a fund for general transportation projects, which may include debt, public transportation and roads.  That means that even though Governor Christie came on my show and made us believe that there was no plan for a light rail, the bill he signed provided for three separate rail projects, including a Hudson and Gloucester light rail.  If these projects are anything close to the boondoggle that is the Trenton/Camden light rail, we don’t need ’em and the project will drive us deeper into debt.

You may remember that the Governor compared my math skills to that of a fourth grader.  But even with my limited math I understand that the tax and the spending plan simply don’t add up.

First of all the revenue projected for the gas tax is $1.3 billion. The projected spending from the state coffers is $2 billion.  So even before the federal government matches our spending, we’re $700 million in debt EVERY year.  Given that the state has nearly $100 Billion in existing debt and more than $100 billion in future pension & benefit liabilities, why would we vote to help them make the problem WORSE?

The Governor plans to use the dedicated tax revenue as the basis for borrowing hundreds of millions more.  Two problems with the Governor’s scheme…first, gas tax revenue has been declining over ten years …so when the revenue projection is lower than estimated (remember the gaming revenue projections?!?), the tax will increase along with the need to borrow.  Second, according to the proponents on the floor of the Senate, almost half of the new gas tax is already allocated to debt service, so where exactly will the additional debt service money come from?

And how about the fact that we have no idea what it actually costs to fix and build roads in New Jersey?!? But what we do know is that it’s more expensive than almost ANY other state.

That’s right, get ready for higher taxes on income and real estate.

On the other hand, if you stand up strong and vote NO, the government will be forced to allocate budget money for priority projects.  Like fixing the aging infrastructure of our roads and bridges.  If we hold the legislature and the Governor accountable, gone will be the new projects until we right the ship and pay for the other priorities promised by Trenton.  How about the allocation of a portion of the sales and estate tax to fix the roads?  How about we entertain Senator Jen Beck’s idea of renegotiating the public health plans to lower costs from $40k per family to $30k.?  That alone could save nearly $1 Billion in the budget and nearly $3 Billion to local real estate tax payers.

That’s enough to fix the roads AND make the $1.5 Billion pension payments to make the teachers whole.

If you vote YES on the question, Governor Christie and Steve Sweeney will be able to borrow billions and spend the TTF money on the projects agreed to in the back room, like the light rail projects which advocates pretended didn’t exist. Additionally, with the latest tax bill the pension is still  underfunded because the politicians created a ONE BILLION dollar hole in the budget almost overnight.

How about forcing these corrupt Trenton insiders to allocate budget money from existing taxes and the new one they saddled us with to fund critical infrastructure projects and pension funding…without borrowing billions more that will be the justification for higher taxes down the road?

Bottom line is that a YES vote is exactly what Christie and the rest of the Trenton insiders want.  Give ’em a strong NO and tell ’em you are sick and tired of the corrupt backroom deals that have left teachers without proper funding and roads in disrepair.

Standup to Governor Christie and his cronies and VOTE NO on Question Two.