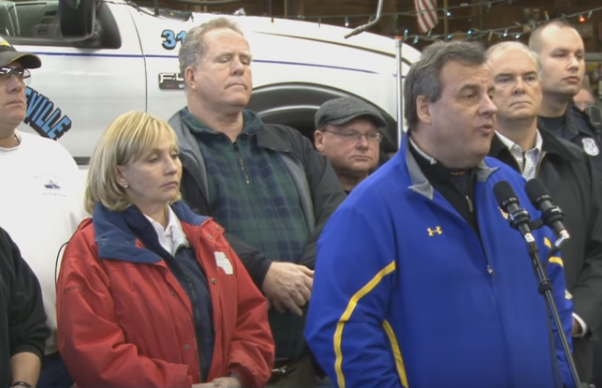 “A vote for question No. 2 is a vote for the gas tax. If you like the gas tax you’ll like No. 2,” Guadagno explained.

Spadea, who explained in a Wednesday Save Jersey post how the deceptively-worded ballot question enables the recent gas tax hike signed into law by Christie, applauded the state’s second highest elected Republican for her independence:

Needless to say the Governor’s office wasn’t pleased with this rare open act of defiance.

“The Governor supports ballot question 2 because it will ensure that all gas tax revenues can only be spent on roads, bridges and mass transit,” shot back Christie spokesman Brian Murray. “This protects taxpayers from future wasteful spending by Democrat legislators. The Governor finds it hard to believe that the Lieutenant Governor supports giving an unguarded pot of money to the Democrat-controlled legislature, rather than on needed infrastructure projects. It must be a misunderstanding.”

A misunderstanding further complicated by the fact that the same Democrat legislature cited by the Governor’s office also supports the union-backed ballot question.

“What we’re really saying in this question is that you have my permission, you meaning the legislators, have my permission to borrow $12 billion and pay for it with that 23 cents, the diesel fuel tax and the ‘baby oil’ tax,” Guadagno added on air. The latter is a reference to the gas tax legislation’s increase on all petroleum products.

Christie and Guadagno have been running mates since 2009 but are known to personally dislike each other.

“You go back and read the question and the explanation, and no where in that constitutional question does it say that (amount would be raised). What we need to do is ask every single legislator who voted rightfully for the lockbox to go back and review it in light of the gas tax tax legislation, which I am completely opposed to at every level. And if you do that, you have to vote no,” Guadagno said.

The Lieutenant Governor is widely considered the front runner for the 2017 Republican gubernatorial nomination.

Once a rock star in state and national GOP circles, the Governor’s connection to the ongoing Bridgegate drama and basement-level approval ratings have rendered him a pariah at least in the early-going heading into next year’s N.J. Republican nominating contest. Guadagno’s chief announced rival, Asm. Jack Ciattarelli of Somerset County, is a frequent and long-standing critic of Christie.