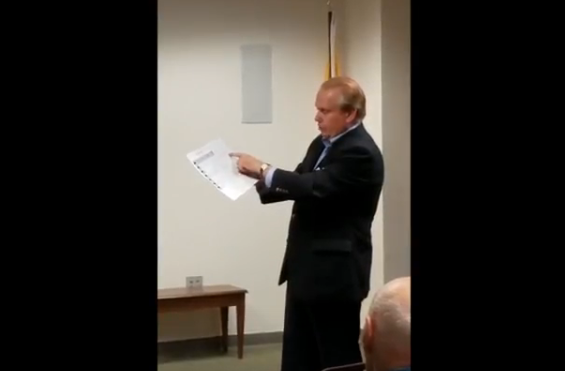 I had the pleasure of visiting Wayne, New Jersey on Wednesday night, Save Jerseyans, a key Passaic County battleground in this spring’s bare-knuckle GOP brawl for control of LD40’s legislative seats.

The North Jersey Regional Tea Party (good folks – check’em out here) invited me to talk about the state of New Jersey politics in 2017, the gubernatorial race, the pension crisis, etc. and so on.

But the real main event? Four candidates competing for those LD40 seats were present: two of the three State Senate hopefuls, Paul DiGaetano and Edward Buttimore, incumbent Assemblyman Kevin Rooney of Wyckoff, and Norm Robertson, the former State Senator who’s running for one of the two Assembly seats.

As you may or may not already know, the DiGaetano/Robertson team recently took the head of Rooney’s slate (Passaic Clerk and LD40 Senate candidate Kristin Corrado) to court over alleged ballot shenanigans. Corrado’s team won round #1 with the judge supporting the Clerk’s position but, in his remarks last night, Robertson again outlined his argument to the assembled LD40 voters and pledged to “go to court as many times as it takes,” all while Assemblyman Rooney watched on from the audience seated approximately 20 feet away from a fired-up Robertson.

No argument erupted but a hint of tension was palpable as Robertson accused his opponents of underhanded tactics.

What’s politics with a little confrontation and lots of drama, right?