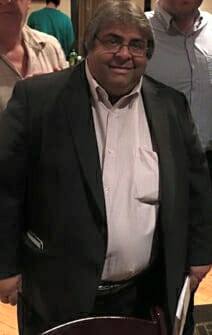 Tragic news this morning, Save Jerseyans.

Multiple Save Jersey sources have confirmed that Republican State Committeeman from Hudson County Russell “Russ” Maffei succumbed to his injuries earlier this morning after a Sunday night hit-and-run accident at Paterson Plank Road and 10th Street in North Bergen.

According to reports, Maffei and a second victim were crossing the road near the Coach House Diner (collecting signatures ahead of Monday’s Election 2017 primary petition deadline) before a driver came careening off of Kennedy Boulevard and through a parking lot before striking the pair. The accident was captured by a surveillance camera. Both victims were rushed to Jersey City Medical Center but both subsequently died.

A corrections officer has been arrested in connection with the fatal accident.

Most recently? Prolific in North Jersey Republican politics, Maffei had served as Jersey City GOP Chairman and proudly stood as a district-level Trump delegate to the 2016 Republican National Convention. He had been an early and extremely proud Trump supporter. Maffei was also a veteran of Chris Christie’s 2009 gubernatorial transition team and, currently, a backer of Lt. Gov. Kim Guadagno’s gubernatorial campaign.

Jose Arango, Hudson GOP Chairman and Chairman of the State GOP Chairs, was among Maffei’s closest political friends and allies.

“Hudson County and the NJ GOP lost a good friend and a loyal Republican. He was that guy that always was there,” Arango told Save Jersey. “I’m personally going to miss Russ… he was my brother and the reality of the Hudson County Republicans.”

Arango mentioned that his friend was also running for reelection to NJGOP State Committee this year.

Save Jersey offers its deepest condolences to Russ Maffei’s friends and family at this difficult time.