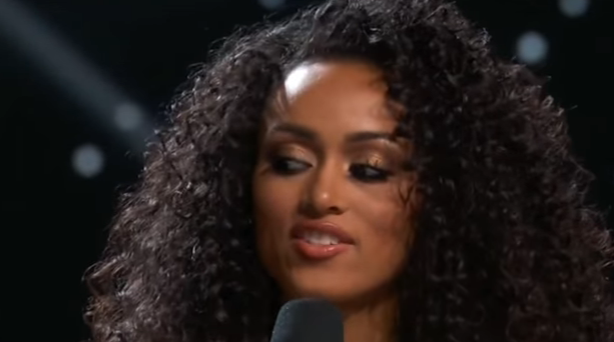 I do NOT watch pageants, Save Jerseyans.

Not because there’s anything wrong with them as a general matter. I’m simply a man of the pre-pajama boy era. Sorry if you’re triggered by my gender-normative attitude. You’ll survive.

In any event, I did read some recaps of Sunday’s 2017 Miss USA competition in Las Vegas, and as with most things these days, there’s a political angle (which is much more interesting to me).

Here are the broad strokes: Miss New Jersey (!) was the runner-up this time around, and that’s apparently a controversial outcome because… the big winner, Miss D.C. Kara McCullough, is a conservative. Or at least NOT a liberal.

How do we know?

Listen to what she had to say in response to a healthcare question (is it a privilege or a right?):

“I’m definitely going to say it’s a privilege,” McCullough explained the audience. “As a government employee, I am granted healthcare and I see firsthand that for one to have healthcare you need to have jobs so therefore we need to cultivate this environment that we’re given the opportunity to have healthcare as well as jobs to all the American citizens worldwide.”

Whoa! What a crazy notion… working for a living! And the idea that expanding EMPLOYMENT might actually be the best path towards prosperity (and getting more citizens the health care coverage they need)! Mind. Blown.

And then there was this little truth bomb in response to a separate question: “I don’t want to call myself a feminist. Women, we are just as equal as men, especially in the workplace.”

You and I might view her candor as refreshingly honest or, at the very least, nothing worth getting worked up over. But you and I aren’t ideologically-deranged, Save Jerseyans. Amazingly, as NJ.com chronicled after the results were in, many bitter New Jersey liberals (mostly liberal women) took to Twitter and somehow found McCullough’s exercise of independent thought thoroughly disagreeable.

But here’s the problem with all of that:

McCullough isn’t just a woman (a beautiful and talented one at that), but she can’t be dismissed as the product of mindless, unearned “privilege” either given that she’s (1) apparently the product of an ethnically-diverse, cosmopolitan, multi-cultural family background and, to boot, (2) she works as a scientist for the United States Nuclear Regulatory Commission (hence her answer regarding her government benefits).

Amazing, isn’t it? Feminists HATE pageants because they objectify women, but when a scientist wins one, but gives the wrong answers, they savage her worse than any patriarchal institution ever would or could.

Why? You know why.

Other than the fact that she collects a government paycheck (albeit one she actually earns)? There’s absolutely NOTHING about Ms. McCollough that fits the liberal narrative.

“Real” women abort their children and blame the patriarchy for all of their problems.

“Real” women doesn’t shrug off those partisan constructs, shrug off attempts to make them feel like victims and succeed in spite of it all.

This young lady succeeded in America despite what liberals insist should’ve made her success impossible.

Consequently? The Left will do what they can to destroy/discredit/hobble this woman; you’re only a female success story by the media’s standards if you believe, and represent, what the cultural elites dictate a woman is supposed to believe/represent. McCollough doesn’t so there’s now a proverbial target on her back.