After trying to raid its surplus, Christie nominates long-time friend Brown for Horizon’s board 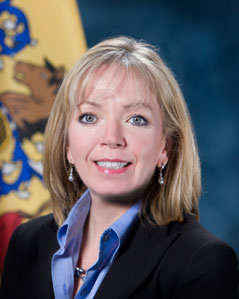 Governor Chris Christie is proposing his long-time friend Michele Brown to sit on the board of Horizon Blue Cross Blue Shield of New Jersey, Save Jerseyans.

The Friday morning announcement comes shortly after Christie sought legislative support to seize the insurer’s emergency surplus to fund low-income residents’ drug addiction services. The move was almost universally panned by politicians and commentators on the right and left sides of the aisle including Save Jersey‘s own Matt Rooney who referred to the Republican Governor’s idea as both “dangerous” and “wrongheaded.”

Today’s nomination is subject to the State Senate’s advice and consent.

Christie and Brown’s relationship extends back to his pre-gubernatorial days at the U.S. Attorney’s office. In 2009, a personal loan extended by Christie to Brown drew intensive scrutiny from regional media outlets.

One month ago, Brown withdrew from consideration for a New Jersey Superior Court judgeship. Christie had nominated her for the post.