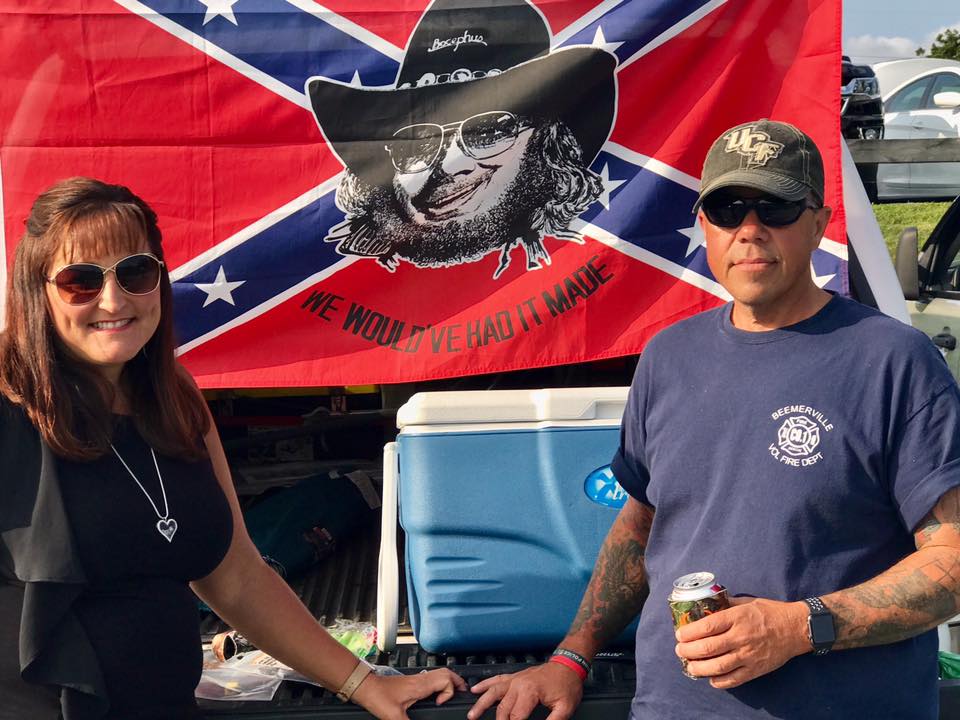 New Jersey Assemblyman Parker Space (R-24) and his wife, Jill, hail from a part of the Garden State that, at least politically, can feel more like South Carolina than North Jersey.

The Skylands are red, and Assemblyman Space’s views issues including the Second Amendment reflect it. So does his taste in music.

This Facebook post from over the weekend (taken at a concert pre-gaming session) predictably triggered quite a few folks from the other side of the ideological/cultural divide:

When reached for comment over the Hank Williams Jr. faux Confederate flag, Parker shot back a characteristically unamused statement (via NJ.com):

“Are you really trying to go there?  It was a Lynyrd Skynyrd and Hank Williams Jr. concert and I was there with about 20,000 others,” Space said, referring to the concert he attended in Bethel, New York.

“Are you saying that those bands are racist?  I am sure the African-American members of Hank’s touring band wouldn’t think so. Thank goodness it wasn’t an Ozzie Osbourne or KISS performance, then you would accuse me a being a Nazi or a satanist,” Space said.

He concluded, “When is this stuff going to end?”

Hank Williams Jr. is reportedly an avowed Republican. From what I’ve been able to discern? He’s never been accused of racism by anyone serious, or said anything that could be construed as racist, but these are the times we live in, Save Jerseyans. There ARE more Nazis out there than 10 or 20 years ago. Not because there are actually more Americans running around harboring Hitler-esque beliefs, but because everyone who challenges the current cultural status quo (like Parker Space or Donald Trump) is immediately labeled a “Nazi.”

Parker’s examples are also spot-on. Musicians push the envelope. They’re entertainers. Always have, always will. They sell tracks by… triggering consumers. It’s what labels live for.

In this respect? They’re no different than Alex Jones or Michael Moore.

Space appropriately cited some of music’s more extreme acts. There are a myriad of others, of course, ranging from Madonna (who has made a career out of insulting Catholics) to the so-called “gangster” rappers, infamous for glorifying violence, rape and anti-police themes in their music, whom the Obamas entertained at the White House.

I can feel your blood pressure rising as I’m typing this, my liberal friends, but I don’t know what to tell you. Facts aren’t always convenient! And as a conservative, I can’t enjoy almost any entertainment medium without hearing/seeing something that is in direct conflict with my own belief system.

Why do your delicate sensibilities deserve special treatment?

The answer to all of this nonsense is obvious: for politicians/the media/cultural elites to stop encouraging Americans to assume the worst in other Americans’ motives.

That’s easier said than done with so much money and power on the line and emotional perspective laid waste by a 24/7, completely integrated news establishment. I’d encourage you to give it a try all the same.

If flags from a movement that’s been dead for 150 years bother you so much? Don’t buy a ticket.

You couldn’t pay me to see Jay Z, Common or Rick Ross in concert. That’s okay.

We don’t have to get along or like the same music entertainment. We’re only obligated to tolerate each other’s preferences.