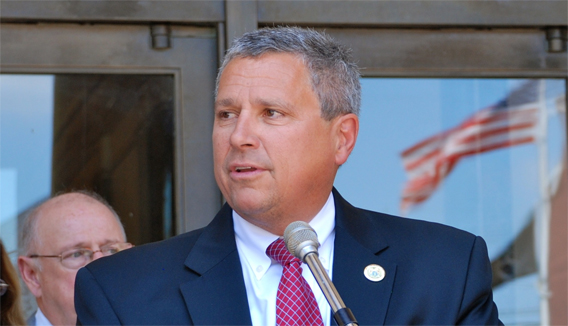 Not many open Democrat seats + Republicans running in districts where Assembly members were knocked off in 2015 + Democrat superiority in the cash war + Phil Murphy’s alarming public polling position + Chris Christie’s toxic legacy = a nearly impossible task on the Assembly side of the State House.

Taking back the State Senate? A long shot at best, though progress is possible if the stars align.

Here is our rundown of the Top 8 (not party specific, and in no particular  order) seats which COULD conceivably change hands in 2017, as compiled by our staff:

Republicans have all but written off the seat where retiring Senator Diane Allen held the seat on the strength of her own popularity (and nothing else) despite Democrats routinely winning the two Assembly seats by impressive margins. This district’s diverse Route 130 communities aren’t fertile territory for GOP candidates. The only seat that seems certain to flip this November, Assemblyman Troy Singleton appears in the driver’s seat as Election Day approaches.

Even before the untimely death of Senator Jim Whelan, the former Atlantic City mayor had announced he would not be contesting the seat this year. Had he run? And been healthy? We would’ve seen an all-out battle royal with Assemblyman Chris Brown. Initially, most assumed a fierce rematch between Assemblyman Brown and Democratic Assemblyman Vince Mazzeo would ensue. However, sensing defeat, Mazzeo instead decided to pursue re-election to the Assembly leaving third-tier candidate Colin Bell to contest Brown. Brown is favored at this point, but it certainly isn’t the foregone conclusion LD7 is due to trouble further up the ballot and the Democrats’ voter registration advantage in the Jersey Shore district.

This is the heavyweight prize fight of 2017 being fought right in both gubernatorial nominees’ backyards of Monmouth County. Senator Jennifer Beck faces her toughest challenge since she initially won her seat from Ellen Karcher several years ago. Former Monmouth Democratic Chair “Camden Vin” Gopal is not inspiring as a candidate, but he has lots of party money behind him from the Democratic machine and a penchant for down-and-dirty fighting. District 11 is trending leftward in recent years as the populations of Asbury Park, Neptune and Long Branch are reshaped by an influx of hipsters and New York retirees.

Adding to Becks’ troubles? Republicans lost the district’s two Assembly seats in 2015, depriving Beck of her former running mates. The new Assembly ticket of Red Bank Councilman Mike Whelan and Ocean Deputy Mayor Rob Acerra is strong, but will Gopal and his machine money simply be too much to overcome?

Last week, word of a shock poll surfaced in Republican circles in which long-time Senator Kip Bateman sat only a few points ahead of his Democratic challenger. Republicans dismissed the poll, but we’d be remiss to gloss over the fact that Democrats picked off a seat in 2015 in this district. On top of that grim portent, incumbent Republican Assemblyman Jack Ciattarelli is not seeking re-election after going all-in on a gubernatorial primary campaign. Bateman probably still has a slight edge at this point, and we’re told GOP operatives in his district are taking the threat seriously and working hard accordingly, but if Princeton comes out strong for Murphy? And we see more late cycle NJEA spending like last cycle? An upset is certainly not out of the question.

Remember the good old days when District 38 reliably topped this list on an annual basis? Those days feel long gone after the ticket collapse of 2015. This year’s ticket is arguably far stronger than the one that came within 50 votes of victory two cycles ago in 2013. New Milford Councilwoman Kelly Langschultz is a rock star on both the campaign and fundraising fronts. Flanked on her youthful, energetic ticket by 25 year old Glen Rock Councilman Bill Leonard and local pastor Christopher Wolf, Langschultz is giving Gordon all he can bargain for by pressing flesh and highlighting Gordon’s poor stewardship of NJ Transit.

The problem (which is always the problem): Gordon’s GOP fundraiser wife, Gail — who recently endorsed Phil Murphy — and deep Democrat connections throughout the state means money is no object for this entrenched incumbent who can, and will, spend to make up for his many other shortcomings.

Little known fact: Steve Sweeney has never recorded 60% or greater of the vote in a State Senate election. More interesting facts: Sweeney is being barraged by the NJEA this year. The semi-competitiveness of the district, the barrage of NJEA money going AGAINST the Democrat, and the strong campaign of Salem GOP Chair Fran Greiner have made Sweeney sweat a little more than usual. The popular union strong man and titular leader of the South Jersey Democrats still may sneak by, but it looks like he may be going ten rounds. Did we mention that this district is one of only two Democrat districts in New Jersey carried by Trump?

District 14 is what District 11 may soon become: a Republican district turned on its head by changing demographics and the march of cultural liberalism. The former seat of recently convicted Bridgegate co-conspirator Bill Baroni, Republicans have not won here in quite some time, though former Senator Pete Inverso made a very strong play for it back in 2013. Now? Cuban-American Hamilton Councilwoman Ileana Schirmer is waging a fierce battle against Senator Greenstein; her effort is also championed by Senate Republican leaders who see opportunity in her candidacy. Schirmer also recently received a boost in the visibility department when she was endorsed by fellow Cuban American and Florida Senator Marco Rubio. The makeup of the district is steadily moving away from the GOP, but a strong candidate is keeping Republicans within striking distance for the time being.

No one has campaigned harder than Republican nominee Daryl Kipnis (never heard of him? check Facebook because you’re probably already friends with him), and perhaps no one has campaigned less than incumbent Senator Bob Smith. The 17th is a brutal district for Republicans, its Senate seat having never gone to a Republican in its history. Kipnis is a “never say die” candidate, and his aggressive grassroots campaign is catching on. If Smith keeps sleeping? And something happens to change the overall political climate over the final several weeks of campaigning? Senator Kipnis isn’t impossible come January. It’s a reach to be sure, but this district might top our “suspected surprises” list if Chris Christie was leaving office with a 71% approval rating instead of 17%.