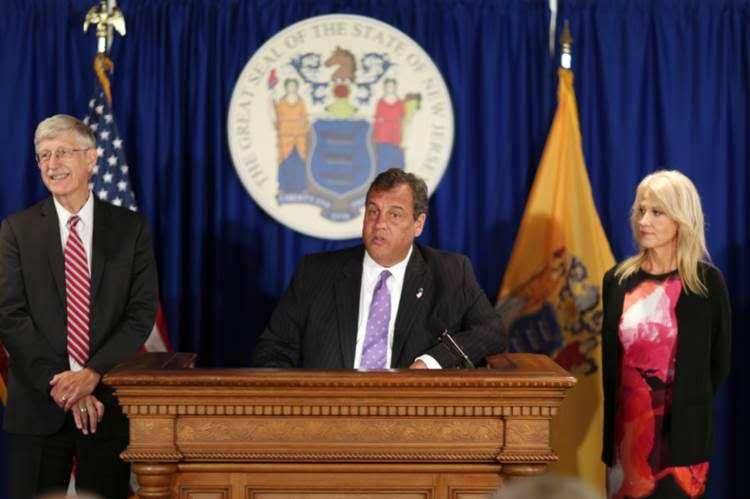 Governor Christie: This problem will not be addressed sufficiently in our country, if we don’t have the active involvement and partnership with the pharmaceutical companies. Without their help and their participation, it will be near impossible to be able to accomplish what we need to accomplish for the American people in terms of dealing with the opioid crisis and the overdose crisis in our country. And so when I was at the White House on July 31st to deliver the interim report to the President, I had the opportunity to meet with Doctor Collins, the head of NIH, and we had the opportunity to brainstorm a little bit that day about ways that we could help to improve what NIH is attempting to do, to assist them, and to make the commission’s work more meaningful. And so the idea of this meeting today was born at that July 31st meeting that I had with Doctor Collins and others, and the exciting part of today, from my perspective, is that each and every one of those companies who came today have agreed to be part of a partnership with the NIH in two respects: One to help to develop new non-opioid pain medication and to put that on a fast track in partnership with NIH, and secondly, is to help develop additional medication-assisted treatment for those folks who are already suffering from this disease to have additional options beyond the three main options that are available right now.

Governor Christie: Today, I think was a very important day in the progress in this. To have all the major pharmaceutical companies here and making this commitment to the Director of the NIH and to the FDA and to the White House and our commission is really important step in this process and you know we can’t predict today, as I said in response to Sal’s question, we can’t predict today how much time this will take or when we will find it but I’m confident today, now, that we will find, because of this partnership, new treatments and new treatments not only for pain but for those who are already addicted. And that will mean an enormous difference in the lives of lots of families across this country who are suffering from this problem right now.

Governor Christie: For me, it’s just been about the people I see affected by this every day. You know, whenever fourth graders use to come to visit the State House, when we were down the street, and I would get to interact with them, one of the questions- they would always ask two questions, right, one was what’s your favorite color? For some reason, fourth graders were all obsessed with what the Governor’s favorite color is, and second was, what’s the best part of being Governor? And I would give the same answer all the time, the best part of being Governor is that you wake up every morning having the chance to do something great. You don’t do something great every day, because you’re human, but you have the chance to do something great. And, so what’s been clear to me is that, this is an issue that I’ve cared about for much longer than the time a became Governor. I went on the Board at Daytop Village, in Mendham, which is an inpatient adolescent drug treatment facility, in 1998, so nearly 20 years ago. So this is something I’ve cared about for a really long time, and something that our Administration has been working on for a very long time but as this crisis has increased, the need for attention has increased even more and resources increased even more. And so how do I feel? I mean, I just feel grateful that there are people that are listening and acting. And as Kellyanne said, the President and I talked a lot about this on the campaign trail in New Hampshire, because as I talked about it, and a video or two that I did got a lot of national attention. We’re friends, and even when we were running against each other we were friend, and he would talk to me about this issue when we would be at debates or other campaign events where we had joint appearances. And I know that he cares deeply about this issue, too. So, now to have my friend the President, who cares deeply about this issue, giving me the opportunity to take a leadership role on it, I consider it a great gift. I’m grateful for the opportunity and hopefully that what we do here, together, can help to save lives. If we do that, then I will have fulfilled what I said to those kids, which is that you have a chance every day to do something great and hopefully this will be one of those things that ultimately will fall into that category.