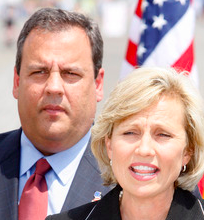 They haven’t exactly been best of friends over the past several years, and the sniping has certainly been noticeable, but Chris Christie took to Twitter on Tuesday night all the same to congratulate his lieutenant governor’s performance in debate number one:

Congratulations to @KimGuadagnoNJ on a strong debate performance tonight.

Christie did not attend Tuesday’s debate in Newark.

Guadagno likely wasn’t disappointed; one recent poll found 3-in-10 voters (29%) reporting Guadagno’s association with Christie makes them less likely to vote for her in November. Democrat Phil Murphy made up for Christie’s absence by repeatedly invoking the unpopular GOP governor as a bludgeon.