Democrat Congressional leaders were conspicuously absent from a planned budget talk meeting with President Donald Trump and their Republican counterparts on Tuesday, leading to harsh words from POTUS and no progress ahead of a December 8th deadline to avert a federal government shutdown. 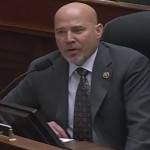 “We have important work to get done in Washington and I’m disappointed that President Donald Trump, Chuck Schumer, and Nancy Pelosi could not put partisanship aside and get together to discuss important issues, like growing our economy and strengthening our military,” said MacArthur in a statement released through social media. “Since I came to Washington, I’ve been willing to roll up my sleeves and work with anyone to solve big problems facing our country—it’s unfortunate some in Washington can’t do the same.”

MacArthur’s criticism is significant and bound to attract some attention given his high profile role in supporting the Trump Administration’s key legislative initiatives in the health care and tax reform arenas.