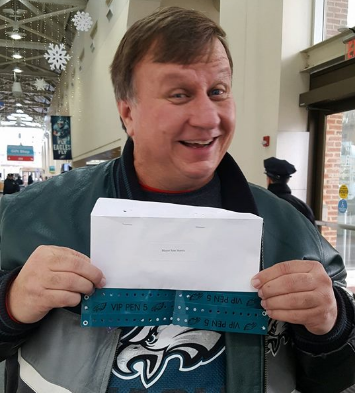 He’ll get to cheer for his team at today’s Eagles Parade in Philly from unexpectedly great seats.

According to the mayor’s Facebook post, he had sent an “email to the mayor of Philadelphia Monday morning and asked him for tickets to sit in the VIP section with him. I figured I’d never hear back from his office. To my complete astonishment they called me and told me I had four tickets reserved for the VIP section sitting with the mayor and the team! And here I am!!!”

Between two and three million fans are expected at today’s parade which will progress from Broad and Pattison near the stadium complex in South Philadelphia down broad street to the art museum.