What if Menendez resigns? 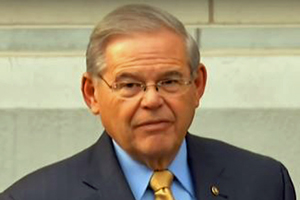 It’s not considered likely that Senator Bob Menendez will resign as a result of the bi-partisan admonishment he received from the U.S. Senate Select Committee on Ethics.  NJ and Washington Democrats have become a much more forgiving people since Senator Bob Torricelli was forced out of office after his admonishment 16 years ago.

As Bret Stephens wrote in a Trump bashing piece in the NY Times yesterday, America’s standards have declined over the years.   Menendez’s admonishment for trading the power of his office for luxury travel and massive campaign contributions will likely blow over as the Democrats and their media partners continue their mission to destroy the Trump presidency.

But what if the Russian collusion with the Senate Ethics Committee works and Menendez decides to take a job running Dr. Salomon Melgen’s port security business in the Dominican Republic while looking over his luxury villa?

If Menendez resigns, Governor Phil Murphy gets to appoint someone to fill the vacancy until January. That person would run in Menendez’s place for a six year term in the November election. Who would Murphy choose?