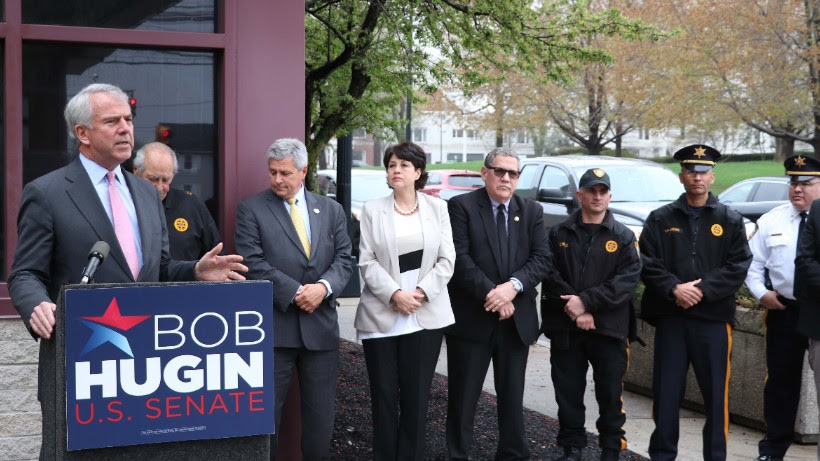 SOMERVILLE, NJ — A large-scale 60-illegal alien criminal round up in New Jersey, coming in the middle of Phil Murphy’s push to reach Sanctuary State status, is now emerging as an issue in this year’s contested U.S. Senate race.

On Wednesday, GOP presumptive nominee Bob Hugin held a press conference outside of the Somerset County Jail with Republican Somerset County Sheriff Frank Provenzano to offer support for U.S. Immigration and Customs Enforcement (ICE) agents and condemnation for those who aren’t supportive of their efforts.

“It’s a shame that our public servants at ICE need to issue press releases telling elected officials, like Phil Murphy and Bob Menendez, to knock off the politics and let them do their jobs. Locking up and domestic abusers and violent criminals should never be a partisan issue,” said Hugin. “Here is the bottom line: I support a clear path to citizenship for Dreamers—innocent young people brought here illegally by their parents who are now leading productive lives—and a similarly clear path to jail or deportation for criminal illegals who are putting our communities and families at risk. I am calling on Governor Murphy and Senator Menendez to join me today, pledge their support to ICE, and abandon their reckless Sanctuary State plan that will make New Jersey less safe.”

U.S. Senator Menendez has been critical of ICE raids notwithstanding clear evidence that the targeted individuals are often hardened criminals.

“The raids are not business as usual. The raids are being done indiscriminately. They’re not focused simply on criminal aliens,” insisted Menendez in a February 2018 video posted on his Twitter account. “And because the administration eliminated the Obama administration’s enforcement priorities — where the first and top enforcement were criminal aliens to be deported, then secondly recent border crossers, and then the third and final tier was anybody else — because they did away with that enforcement priority list, now anyone who they come upon who may be undocumented ultimately gets picked up and sent away.”

Contrary to Menendez’s characterization of the raids, 80% of those rounded up by ICE in the agency’s latest New Jersey sweep are convicted criminals; 20 had either been the target of a final order of removal but remained all the same or were kicked out of the United States and returned without the proper visa.C

“As Somerset County Sheriff, keeping the community I serve safe is my highest priority, which is why I applaud ICE’s recent successful public safety operation,” added Sheriff Provenzano. “Law enforcement officials and elected government officials are sworn to uphold the law and protect the communities they serve. Cooperating together to keep our communities safe should be an issue that we all agree is one that is above politics.”