The race for District 38 is on.

As Democrats have coalesced behind Assemblyman Joe Lagana to take the Senate seat vacated by Bob Gordon (he’s off to the BPU), at least two openings will appear on the ballot in November. Soft rumblings indicate that a third opening may arise if Assemblyman Tim Eustace is stashed away in another position. TBD.

What are the Republicans saying?

District 38 Republican Chairman Jim Arakelian took to Facebook today to push (he says largely as a jest) for former candidate Fernando Alonso (who is a friend of Arakelian): 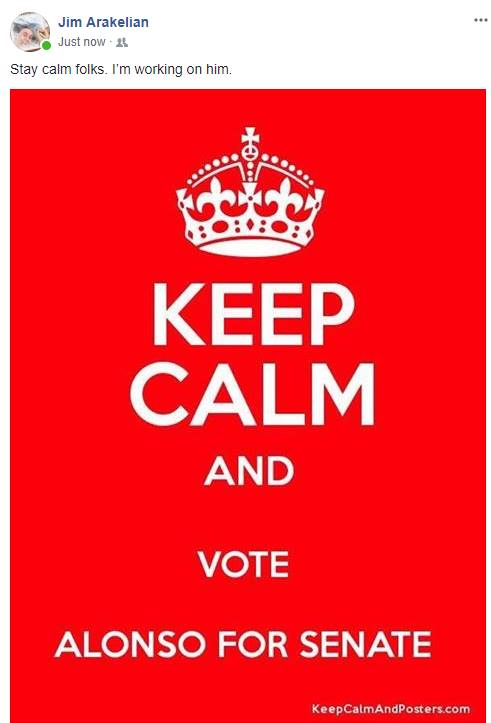 Alonso, who recently dropped his bid for BCRO Chairman, carries name recognition from previous runs. However, Arakelian also pushed for Alonso in 2017 only to be overridden by Tom Kean Jr. who preferred New Milford Councilwoman Kelly Langschultz. That’s one account of events. Arakelian, who reached out to Save Jersey after this post was already published, said it was a mutual decision.

Langschultz is the preferred candidate of most in the party. Despite the strong Democratic year, she impressed the party with her performance and her ability to raise a staggering amount of money in her 2017 run against Bob Gordon.

“Kelly’s the candidate if she wants it,” according to someone close to the decision making apparatus.

However, Langschultz may be reluctant to go through another campaign at this time. She has also recently gotten involved in other endeavors within the party. If Langschultz were to pass, most expect the party to turn to former Freeholder John Felice. Felice, 60, won twice countywide and carries tremendous popularity in Fair Lawn where his father served as Mayor and Assemblyman.

With Gordon gone, Fair Lawn suddenly comes back into play.

Whoever the candidate, Republicans appear energized for the first competitive special election of the Murphy era.

Arakelian, for his part, insist “there are no favorites in the race as of today” and that all observers can be “assured that anyone that puts in for it will be given a fair and impartial opportunity to run in a convention.”