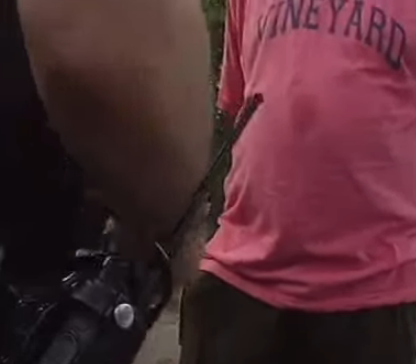 “I didn’t swing and punch her. I would never do shit like that,” Barclay appears to tell police who responded to the scene, suggesting that he was acting in self-defense.

Barclay, reportedly a supervisor for Camden County’s Department of Events and Community Outreach, also made multiple requests for the responding officers to contact a police lieutenant; a third party repeatedly asks the officers why the other woman involved in the incident was not being placed under arrest.

Republicans were quick to question local Democrats’ and county officials’ responses to the situation after the video’s publication.

“While we don’t want to pile on Mr. Barclay as he deals with his personal issues we believe it is important that county government is transparent in how they deal with the fact that he is a county employee,” Keith Camden County Republican freeholder candidates Keith Cybulski said in a statement. “The same county and police department spokesman who claimed they were just made aware of the situation promised it would be ‘investigated by human resources as a personnel matter.’ However, yesterday afternoon a report was published that stated Barclay still holds his nearly $60,000 a year county job.”

Barclay reportedly has a court appearance on July 20th.