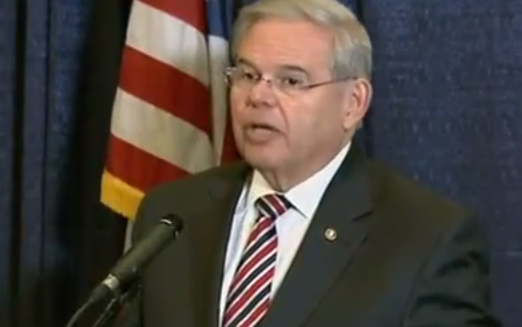 Bob Hugin is facing his first challenging news cycle of this year’s U.S. Senate contest, Save Jerseyans, and it involves something which happened in the 1970s, when the 60-something Republican nominee and former biotech executive was a senior in college.

Apparently, Princeton University has these “eating clubs” (don’t ask me; must be a rich person thing), and the then 21-year-old Hugin, a senior in college, reportedly told the Central Jersey Home News that a gay guy “wouldn’t last long” in his club.

A stupid thing to say? You bet. Not a sentiment most people (myself included) agree with today, in 2018, but that’s today. This was FORTY-TWO years ago, a very different time in our culture and our history, and Hugin was at an age when, let’s face it, obnoxiousness is a dominant personality trait for many young people.

We’ll get back to this in a minute.

Fast forward to the 1990s. Hugin was in this 30s, still involved with the club as an alumni leader, and he fought against a legal effort to compel the eating club (an all-male organization) to admit women, an issue which was ultimately resolved in the complaining party’s favor in court. Hugin doesn’t appear to have said anything sexist (e.g. “women don’t belong in a man’s world” or anything crazy like that); he did make legal arguments concerning the right of a private club, rightly or wrongly, to freely associate with whom it pleases (the Boy Scouts have infamously dealt with this issue in recent years). It remains a controversial topic even today.

It should also be noted at this point that Hugin actually voluntarily brought this stuff to the public’s attention, expressing regret for some of his views as a younger man at a Friday press availability. Team Menendez was predictably unmoved all the same and, perhaps, a little pissed that it didn’t get the jump on dropping this opposition research on the GOP nominee’s head in the form of an attack ad.

“It’s no wonder that Hugin has donated hundreds of thousands of dollars to candidates who have fought to roll back women’s and LGBTQ rights and served as the New Jersey finance chair and a delegate for a presidential candidate who bragged about sexually assaulting women,” belched Melendez Campaign Chairman Michael Soliman in a Friday fundraising e-mail following the Hugin revelations, referring to President Donald Trump (because everything comes back to Trump).

Something else that’s a ‘wonder’ to me?

How Bob Menendez of all people can make these arguments with a straight face.

These Hugin revelations are decades old.

In 1996, four years after the female discrimination case over at Hugin’s eating club was settled, an adult Bob Menendez (a member of the U.S. House of Representatives) voted FOR the Bill Clinton-backed Defense of Marriage Act to deny access for gay couples to federal benefits.

Menendez changed his mind and endorsed its repeal in 2011.

Human beings change their minds. We ideally accrue wisdom and get smarter as we grow older.

Senator Menendez presumably knows this at some intuitive level of his being which is why, to recall another example illustrating my point, Melendez happily cosponsored legislation with Robert Byrd of West Virginia during their four years together as Democrats in the U.S. Senate. Many of you will remember that “Sheets” Byrd was a RECRUITER for the KKK in his 20s and 30s, rising to a leadership role. Democrats like Bob Menendez never seemed to mind these past misdeeds; when he died, President Obama hailed Byrd as “a voice of principle and reason.” Regarding that first topic, you’ll recall Obama was anti-gay marriage, too, until a few years before he wasn’t.

You can undoubtedly see my point here, Save Jerseyans, concerning the reasons why the Menendez campaign’s efforts to disqualify Bob Hugin as some sort of evil bigot is not only a little ridiculous but woefully hypocritical, too.

Therein lies one of the many perils of re-litigating personal histories, especially near-ancient histories.

The objective, fair analysis for this case: both Bobs in this New Jersey race held views in the 1990s which they no longer espouse today.

One Bob (the Hugin) has also served his country in the Marines, employed thousands of people of all backgrounds and persuasions, and saved countless lives through his former company’s work in research and production of cancer drugs.

The other Bob (Menendez) is still developmentally-delayed on the accrued wisdom front which we were discussing a moment ago. He only recently was severely-admonished by a bipartisan U.S. Senate panel for accepting improper gifts from a friend and donor convicted of the most massive Medicare fraud scheme in U.S. history.

So if perfection is your measuring stick for this year’s U.S. Senate election, folks? Good luck. There isn’t a politician alive today who hasn’t “evolved” — either genuinely or for the sake of political expediency.

But if you’re looking for a candidate who IS, today, an ethical, accomplished leader who appears to have learned from his past? And is ready to honestly work with all of us to accomplish the challenges of our now and the future? Mr. Hugin is the only Bob option who can pass the maturity test.

Is that really a test upon which Bob Menendez wants to risk his political future? I wouldn’t be so sure were I wearing his shoes.