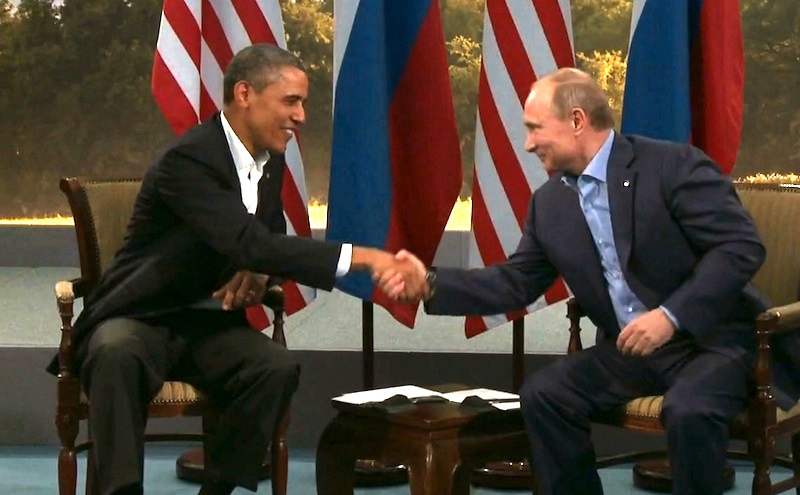 OK, so let’s try to sort this all out.

And let’s do it with the actual facts as we know them.

Under Secretary of State Hillary Clinton we sold Russians our precious uranium for cash. And the Clinton Foundation took money from the Russians. And Obama was caught on an open mike attempting to make a sweetheart deal with the Russians, promising them he’d have “more flexibility” with them after he was elected. And it was also Obama who mocked Romney and the Republicans for calling Russia our enemy. And, yes, Obama did nothing about the DNC being hacked even though he knew it was ongoing.

So, if the Democrats were truly concerned about the Russians, why did they engage in these activities and why did they allow all this to happen?

Now, on Trump’s part, here’s what we know: Trump armed Ukrainian forces with deadly weaponry against Putin’s wishes. And Trump also initiated Syrian airstrikes that killed Russians in Syria. And it was Trump who did what Obama wouldn’t do — vigorously condemn the annexation of Crimea. Also, under Trump dozens of brutal sanctions have been approved against Russia and Russian embassy staffers have been sent packing. Plus, Trump refuses to recognize Putin’s annexation of Crimea while drastically building up our military and even announcing plans for a Space Force to take our defenses into the stratosphere — a move that scares the hell out of Russia and that Russia strongly opposes.

You need to know these things before you jump to conclusions and before you begin to accept the cockamamie theories of liberal Democrats regarding Trump and Russia.

Pay attention to what President Trump does vis-a-vis Russia, not just what he says.

First the Democrats insisted Trump would bring us to the brink of nuclear war because he was a reckless warmonger.

Now, they excoriate him for the polar opposite –waging peace!

The truth is that the Democrats don’t really have a foreign policy and, in fact, they have no policy anymore about almost anything, period. Their “policy” is this inane and this ludicrously simplistic: Whatever President Trump is for, they are against. Whatever they think will destroy Trump, they are for.

They are afflicted with a terminal case of TDS: Trump Derangement Syndrome.

But none of this will stop them — none of it.

They are bound and determined to bring down our nation’s duly elected government and to undo the world of democracy.

And that’s the sort of tyranny that you should really be worried about.