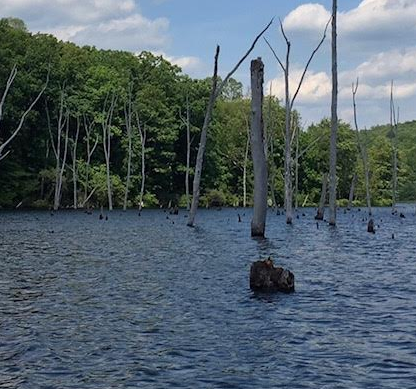 Ursus Americanus: The IUCN has listed Black Bear as being of “least concern” due to widespread habitat and growing numbers. However, on a warm Saturday afternoon, I became extraordinarily concerned about the black bear of New Jersey, and my own life.

My name is Alex Kenny. As far back as I can remember I’ve been an avid fisherman, which has led me to the conclusion that I was, in fact, born one. Weekends and evenings after school and work largely occupied with catching Bass, Crappie, Perch and Trout. Growing up in Bergen County, I was a steady fixture at Schlegel Lake in Washington Township for the better part of the 20-odd years I lived in that town.

At almost every point in a fisherman’s life, they’ll consider buying a boat to explore different parts of lakes that simple bank-angling cannot offer. I found my boat upside down on the side of the road in Teaneck, waiting garbage pickup. Lugging it home, over the next month I patched the fiberglass and made it lakeworthy. 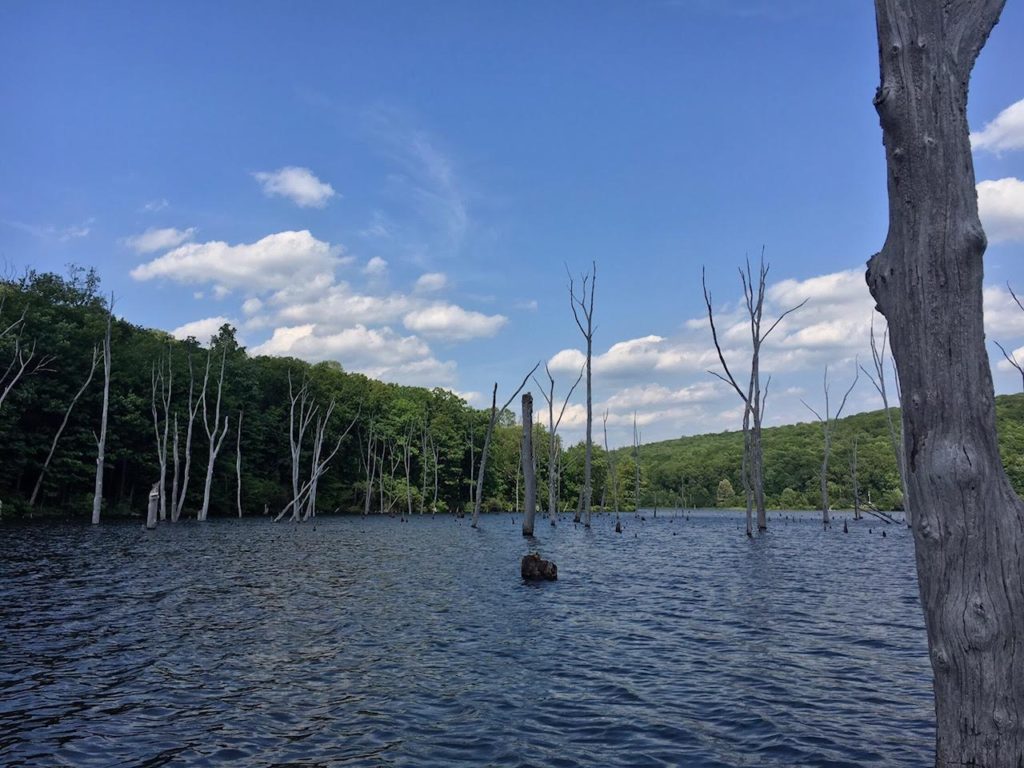 Smash cut to that warm September day. I put in at Monksville Reservoir in Long Pong Iron Works State Park “up” in Ringwood. My companions for the afternoon were a radio to listen to baseball and a cooler with ice and a sandwich. Spending the next five to six hours picking my way along the west shore and having success in filling the cooler with panfish, I crossed under the Greenwood Lake Turnpike bridge and headed for the dead submerged forest along the north shore; a spot I’ve seen Muskellunge, Pike, and Panfish in decent numbers.

With the sun sinking over the hills I tied my boat to one of the trees near the shore in the shade, flicking a top water lure along the shore line in hopes of drawing out a larger game fish when I heard a short but heavy exhale from behind me.

Turning around, I was now face-to-face with a bear roughly the size of a refrigerator, on all fours leaning into my boat from the bank. Black fur that almost had a luster to it, with a paler almost yellowing snout protruding from it’s enormous head.

Dropping my pole and screaming, I fell backwards into the bow of the dinghy. The bear recoiled back, clearly startled by my reaction. Half screaming, half yelling, “AH! Go on, git! Go!” I fumbled for my Maglite in a false hope of bludgeoning the animal should it try to come closer. I’ve never felt fear like this before, my insides turned to ice and my hands weren’t processing simple tasks well.

With my boat tied to a tree, and the bear essentially on top of my motor, it looked like my only avenue of escape was to swim away.

The bear stared at me for what felt like an eternity, snapped it’s jaws loudly, and with a low growl made off back up the bank into the woods. The smell of wet-dog hung heavily in the air. 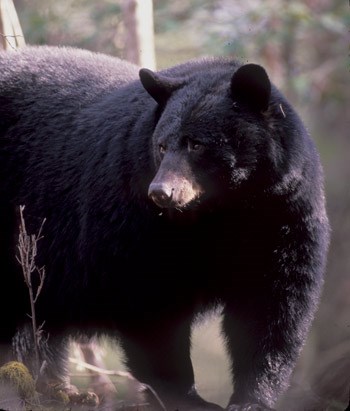 Stunned, I laid still for a moment. Regaining the feeling in my extremities again I sprang to the side of the boat, grabbed my knife and sliced the mooring loose, dove towards the motor and kicked it to life. I didn’t take my eyes off the bank until I was in open water.

I didn’t know you were supposed to call-in encounters like that to Fish and Wildlife. Heading back towards the boat launch my hands were shaking violently, and teeth chattering like it was freezing. I didn’t know who to turn to. Who to talk to. Or what to do.

Less than two weeks later, Rutgers University student Darsh Patel was killed by a black bear about eight miles south of my own encounter.

The bear hunt is necessary. Without it, the population will continue to grow, and more negative encounters will occur. Some will leave the victim scarred, mentally and physically. Others wont live to tell the story.

Anti-hunting activists and well-fenced-in politicians tell us that instances like this don’t exist. Or bears only attack mean-spirited-men-with-guns in the woods. Darsh Patel was hiking. I was fishing. I’d like to see one of those activists say to-my-face that the bear meant no harm, or that my life doesn’t matter. Those who enjoy and spend time in New Jersey’s Public Lands are exposed to a great threat every time they want to spend time outside.

For all the time I spend fishing, it’s hard not to keep looking behind me frequently, looking to see those dark brown predatory eyes staring back at me. Looking into me the same way that the hungry look at dinner: food.

ALEX KENNY is an avid outdoorsman, craftsman, and construction manager. He is a graduate of Fairleigh Dickinson University where he majored in Engineering and bass fishing. He lives in Union Township. Read Full
More posts by the Author »