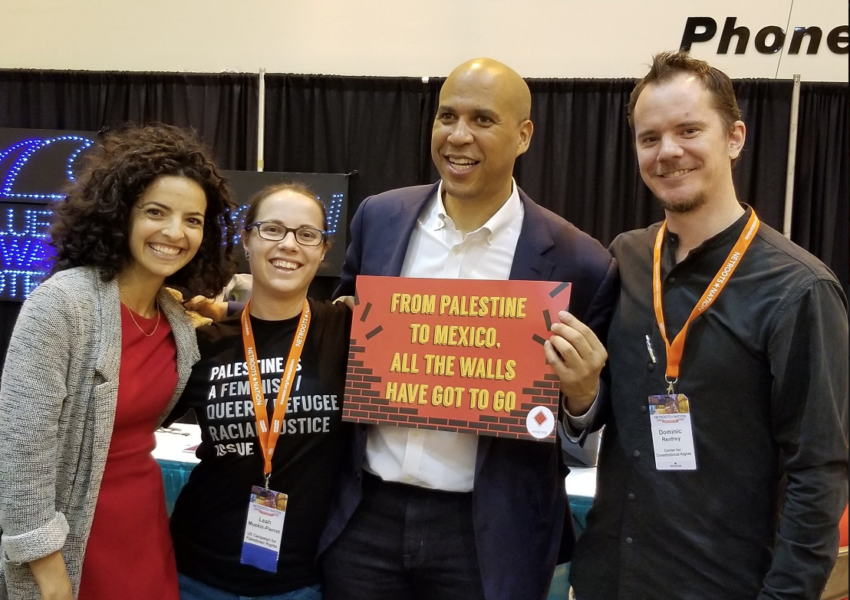 An increasingly angry, partisan Cory Booker (D-Twitter) continued to double down on his “tear of rage” approach to the 2020 presidential shadow primary this week. It’s sad to watch given that this guy was once Newark’s great hope. That was, of course, a long time ago.

It all happened at this week’s far-left ‘Netroots’ conference for liberal wackos; Booker was caught cheesing for the cameras holding a sign that read “From Palestine to Mexico, all the walls have got to go,” a popular slogan for anti-Israel radicals:

Excited to be here at Netroots Nation talking with progressives like Sen. Cory Booker about our shared commitment to freedom, justice, and equality for all people. #NN18 pic.twitter.com/ljswLmv32w

A Booker spokesman later insisted when asked about it that the Senator didn’t have a chance to read the sign before holding it. Hm.

Presumably Booker DID read his prepared remarks, and what he said on stage wasn’t much better than what was on the sign.

“I’m a big believer that if America, if this country hasn’t broken your heart, then you don’t love her enough,” Booker lectured attendees. “Because there’s things that are savagely wrong in this country.”

This attitude is a far cry from Bill Clinton’s “there is nothing wrong with America that cannot be cured by what is right with America” quip from his 1993 inaugural address, but welcome to the Democrat Party in 2018. This isn’t your grandfather’s Democrat Party (or even your older brother’s), yet it’s the party Booker is determined to lead by appeal to the liberal base’s most hateful elements.

Booker’s disturbing rhetoric is developing into a scary pattern. Just last monthly, for example, he declared that anyone failing to oppose Trump Supreme Court nominee Brett Kavanaugh is “complicit in evil.“

Will New Jersey media (finally) cover any of this? Instead of running recycled “Trump is mean” stories with leading headlines? And skewering NJ 101.5 radio hosts for stupid jokes? Don’t take the odds.