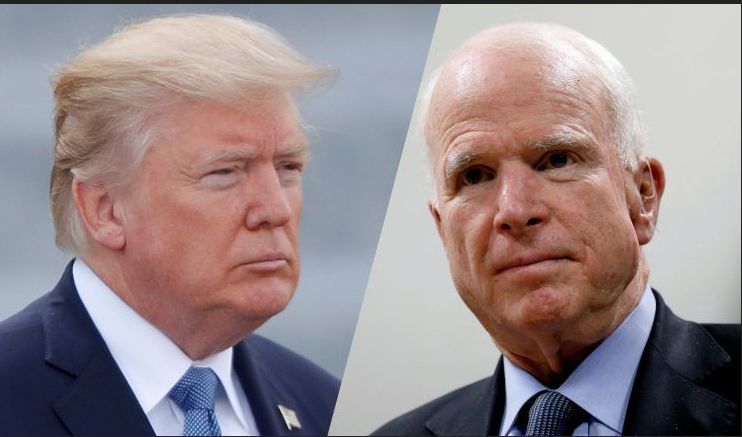 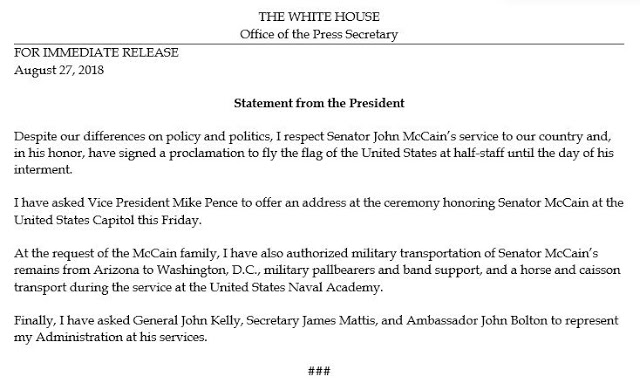 Under the official US flag code, flags should be flown at half staff for 24-48 hours following a the death of a member of Congress. That’s really all that is designated. The Code, adopted in 1942, dictates that when a member of Congress dies, the flag should be lowered “on the day of death and the following day.”
In the case of Senator John McCain, President Trump extended that period.

Let’s face it: no matter how President Trump handled or reacted to the death of McCain, he would have been criticized.

To begin with, the two men were neither friends nor political allies. In fact, they really didn’t like one another and, given the temperament, background and outlook of each man, it’s really unlikely they would have ever meshed in any significant way.

We’d say that considering that he was in a tough spot, Trump struck just about the right tone. He’s tried to be respectful without being hypocritical. It’s not like he loved McCain or thought the world of him — he didn’t. And, after all, McCain specifically stipulated that he did not want President Trump to attend his funeral and, in his final letter (written prior to his death but released afterwards) McCain took one more veiled shot at Trump and his policies.

Look, we think it’s sad that someone would choose to leave this world while still harboring an apparent grudge. And one would have hoped that the two men could have resolved their differences.

But, haven’t we had enough of phony politicians praising colleagues that they really hate and/or have secretly thwarted, repeatedly? Aren’t there enough of those kinds of people in Washington? Isn’t that what’s wrong with the town — what makes it a swamp?

President Trump attempted to work with McCain. He tried to bring him into the loop. But on one of the president’s top priorities (the repeal of Obamacare) McCain let administration down at the last possible moment even though McCain led everyone to believe he was in favor of (and, indeed advocated for) Obamacare’s repeal. It was nothing less than a heartbreaker.

Hey, Washington is a tough town.

And this is just another thorny chapter in its prickly history.