ROONEY: Nike gives up on greatness brand, celebrates Kaepernick “for being terrible at his job” 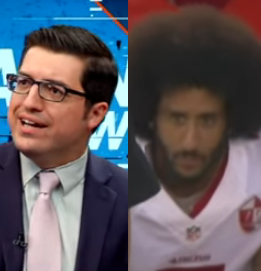 TRENTON, NJ — Was Nike’s decision to back the America-hating Colin Kaepernick as its new poster boy good business?

Save Jersey‘s Matt Rooney joined the Chasing News A+ panel on Tuesday and predicted that Nike would eventually suffer for its decision.

“At the end of the day, the reason people watch sports is that they want to be inspired by greatness. And the ‘just do it’ campaign used to belong to athletes like Michael Jordan, Roger Federer, who were great at what they did for a living. Now, Nike wants to celebrate a guy who is famous for being terrible at his job, losing his job, and then complaining about it,” said Rooney.