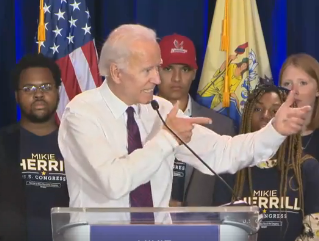 MONTCLAIR, NJ — Uncle Joe is back and helping The Onion write new material free-of-charge, Save Jerseyans. The gift that keeps on giving!

On Wednesday afternoon, during the visibly aging Vice President’s remarks at a Montclair University rally for NJ-11 Democrat nominee Mikie Sherrill, Biden offered up some harsh words for his own party during one of his more coherent riffs at the podium.

“They’re not ‘deplorables,'” said Biden, referring to Hillary Clinton’s infamous moniker for Trump supporters. “They understand we’re in the midst of a fundamental industrial change.”

The ex-Veep also offered campaign messaging advice for Democrats running in 2018 at a time when his party is impeachment-obsessed: “It’s not enough to point out how dangerous this administration is. We have to talk about what we’ll do.”

In his closing remarks? Biden even rewrote a little history after waxing about the Vietnam era’s penultimate moments.

“About 11 months later, at the Kent State campus, like this beautiful campus, 17 kids were shot dead, in cold blood, on a beautiful day,” recalled an animated Biden, gesturing with his hands as if holding an invisible rifle for dramatic effect.

His number is way off; the real death toll was 4, not 17, as any Crosby Stills Nash and Young fan of “Ohio” knows.

Biden is reportedly seriously considering a presidential bid in 2020 after passing on 2016. I sort of hope it’s true. Trump vs. Biden is the debate we deserve.