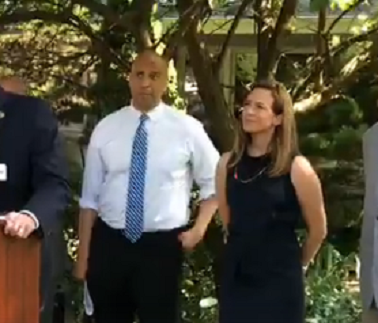 Politicians have been known to “evolve” or change their minds, Save Jerseyans, but some instances are a little more obvious (and nakedly opportunistic) than others.

On rare occasions? After all of the flip-flopping, triangulating, mealy-mouthed back-tracking, it’s hard to tell what the position even is!

Mikie Sherrill’s ability to get on every side of nearly every issue continues to confound voters in one of New Jersey’s most hotly-contested congressional district this year. On Friday, the NJ-11 Democrat nominee flip-flopped on this week’s hottest issue: the 2016 gas tax legislation which just resulted in another 4.3 cent increase scheduled to take effect on October 1st.

Here’s what Sherrill had said back on June 18th about her GOP opponent in this year’s House race, conservative and consistent gas tax critics Assemblyman Jay Webber (h/t InsiderNJ):

“He is in favor the GOP tax bill that hits New Jersey harder than any other community in the country and voted against lowering the state sales tax and against raising the earned income tax credit and the retirement tax exemption.”

The infamous 2016 legislation, championed by Chris Christie, liberal Republicans, and the Democrat legislative leadership, coupled the original 23 cent gas tax hike to a small cut in the state sales tax.

“In response, Sherrill says she does not support the pending gas tax hike.”

FYI: The aforementioned 2016 legislation included an mandatory future gas tax increase (like the newly announced 4.3 cent increase) if revenues from the tax dropped below $2 billion.

So Sherrill supports the gas tax hike legislation… but not the actual gas tax hikes CONTAINED in it?

That’s kind of like saying, “I love omelettes except for the eggs.”

“Mikie Sherrill can’t have it both ways,” said Campaign Spokesman Harrison Neely on Friday evening. “She may be new to running for public office, but she seems to have masterfully adopted the culture of the New Jersey Democrat politicians she surrounds herself with. At the end of the day, Mikie is a tax-hiking liberal who will make New Jersey, and America, less affordable for everyone.”

I’d be able to respect an honest liberal, Save Jerseyans, even if we couldn’t agree on much.

Sherrill? She’s about as far from honest as you can get, to the point where it’s hard to know WHAT, if anything, she actually believes.