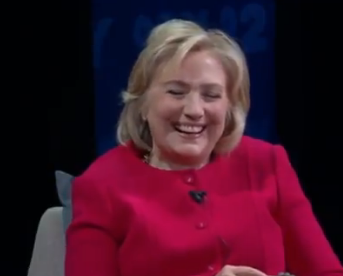 Hillary Clinton, who served as Secretary of State, United States Senator and First Lady of the United States, not to mention the Democratic nominee of President in 2016, said something that by all accounts was inappropriate and racist.

It’s likely, and the video seems to back up the claim, that the words were meant as a joke during a conversation on a podcast about diversity and political correctness. But I can tell you, if anyone else, especially a white person, made the joke, they’d be vilified and likely fired from whatever job they held. Here’s the video:

Couple things, other than her history of racial gaffes, remember the “super-predators” remark about black youth? There’s the issue of context. They were talking about political correctness and diversity and given the laughs in the crowd and from Hillary, it seems plausible that she was simply joking.

However, what a double standard. Megan Kelly just lost her job after making a reference to black face in the context of a Halloween conversation. Why the silence on the part of Senator Cory Booker and Governor Phil Murphy? They are so quick to condemn everyone with whom they disagree, but nothing on Hillary? Even if it was meant as a joke, it’s a totally inappropriate thing to say.

We’ll have a full discussion on Chasing News tonight and my friend on the Left, Lisa Durden, has some pretty fiery things to say about the whole mess. I’ll post that video tomorrow.

In the meantime, how about a little consistency from the media and the Democrats? Maybe apply the same rules about speech to everyone regardless of party affiliation?

Should Hillary apologize? Will she?