The Fifty-Year Folly Of Liberal Orthodoxy 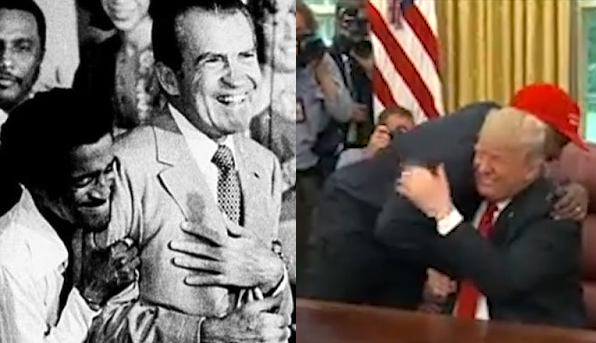 The minute I saw Kanye West hugging President Trump in the White House oval office, I thought of Sammy Davis.

I wonder how many people alive today even know who Sammy Davis was.

Sammy was one of the most versatile, most dynamic, most talented entertainers of the 20th century. Sammy could sing, dance, act, crack jokes and do imitations that were so spot-on, you wondered if there was anything he couldn’t do. He excelled on the big screen, in recording studios, on Broadway, in nightclubs, on television, in big arenas, Vegas showrooms and everywhere in between. He really was one of America’s first superstars. 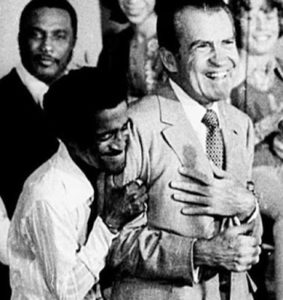 And he was also one of the first African-Americans to achieve such a stratospheric level of stardom. Of course, Sammy Davis had been entertaining almost from the time he took his first steps. As a youngster, he was part of the Will Matsin Trio, performing with his dad. Sammy knew deprivation, segregation and discrimination — knew them all first-hand because that’s what he actually experienced day-in and day-out.

So, when he was able to, Sammy Davis joined the frontlines in the battle for civil rights. He marched alongside Dr. King and Rev. Ralph Abernathy and Jessie Jackson and so many others who made up the vanguard of the civil rights movement in the 1960s. Backed by his pal, Frank Sinatra, Sammy brought notoriety and glamour and cachet to a cause that soon captured the public’s imagination.

Before long, Sammy Davis was more than a superstar; he was also an icon and a pop-culture statesman. He was chummy with all the powerful big-name liberals of the time including those in the media, academia and the entertainment industry. He knew senators, congresspersons and governors. And, after he helped elect Jack Kennedy, he counted the President of the United States as his friend.

Or so he thought.

Because, once he served his purpose, the Kennedys jettisoned Sammy. Word was Sammy had become a liability inasmuch as he was married to a white woman.

Sammy Davis learned a hard and painful lesson. When it comes to extending genuine equality to others, liberals don’t always practice what they preach. And their hypocrisy can be devastating.

Not amused with the treatment he endured at the hands of left wing elites, Sammy joined the Republican Party and in 1972 endorsed President Richard Nixon for re-election. Sammy entertained at the GOP convention that year. And that’s when Sammy Davis and the President of the United States embraced. It came to be known simply as “the hug” and it was truly a seminal moment.

Sammy never seemed so elated and Richard Nixon never seemed quite so natural, animated and totally delighted. In fact, President Nixon even placed Sammy Davis on his National Advisory Council on Economic Opportunity — a prestigious position for any American, let alone for a guy who never even attended school. Sammy now had real clout. And he also had that White House invitation that had heretofore been elusive. 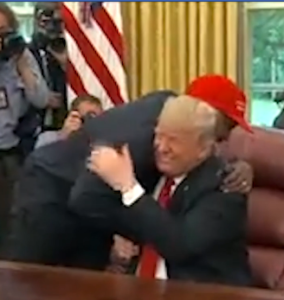 But none of this sat well with the liberal cognoscenti and the Black leaders corralled by the Left. They called Sammy a traitor and an Uncle Tom. Blacks accused him of turning his back on them and embracing a white lifestyle. And Sammy received death threats and was warned of organized boycotts.

Now, here we are 46 years later and this nonsense is playing out in front of us all over again.

Yes, it’s been almost half a century and we’re still seeing and hearing the same thing. Kanye West has also been excoriated. He’s been mocked, ridiculed, threatened, slandered and has even had his mental state called into question.

Why? Because as an African-American he refused to tow the liberal line. He insists on raising questions; he demands the right to think for himself; he refuses to fall into lockstep.

And for this, liberals in politics, the media, academia and the entertainment industry have come after him with a vengeance. It’s ugly. Very ugly.

Yes, liberals — the people who preach tolerance and understanding; who have long said they want a free and open dialogue — are the same ones who insist on a rigid devotion to leftist dogma, especially among minorities. Their message is “think and act our way or suffer the consequences.”

One would have thought that after all these decades liberals would be secure enough (and respectful enough of African-Americans and other minority groups) to loosen the presumed reins and relinquish such myopic orthodoxy. But the mere thought of such a move seems to make liberals apoplectic.

Still they call themselves “progressives.” Why then should it be unreasonable to think they might have progressed? Sadly, such is not the case.

Which only makes Kanye West seem all the more insightful.

Or, to quote Thomas Sowell: “It’s amazing how much panic one honest man can spread among a multitude of hypocrites. ”