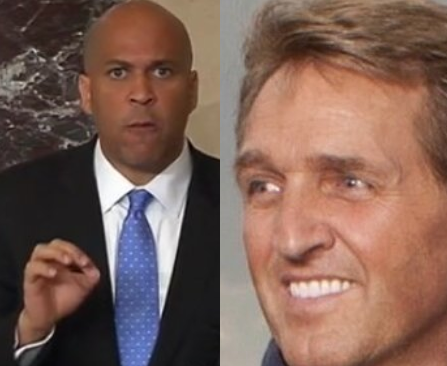 WASHINGTON, D.C. — Despite the fact that President Donald Trump has made no move to fire Robert Mueller, outgoing U.S. Senator Jeff Flake (R-AZ) is teaming up with Democrats to block qualified Trump judicial nominees until the Senate votes on a bill to “protect” the special counsel.

One of the Democrats is none other than Gropacus (f/k/a Cory Booker). Booker allies Flake and Chris Coons (D-D.E.) failed to secure a vote by the whole Senate on Wednesday after Majority Leader Mitch McConnell blocked it.

The dramatic Flake/Booker/Coons bill mandates that a special counsel could only be removed by the U.S. attorney general or, alternatively, whoever is the highest ranking and Senate-confirmed U.S. Justice Department official on deck. The fired special counsel would also need to receive written notice setting for the reasons for dismissal. Mueller would also be allowed the challenge his firing in court.

The bill had cleared the Judiciary Committee back in the spring with sponsorship by Flake, fellow Republican Thom Tillis, Coons and Booker.

Impacted federal judicial nominees include 21 individual presently pending before the Senate Judiciary Committee in addition to 32 more who are waiting for a full vote on the Senate floor. Flake sits on the judiciary committee, and the GOP’s current slim 51-seat majority could endanger new confirmations between now and the new year.

This isn’t Booker and Flake’s first collaboration; for example, the pair of extremely serious and busy federal legislators held a cute snowball ‘fight’ for the cameras back in March.