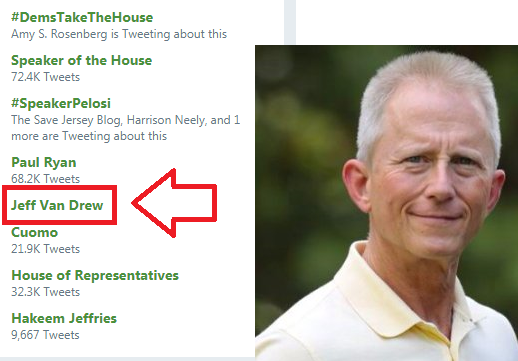 And Twitter predictably pounced, causing Van Drew to actually trend on Twitter on his first day in Congress:

Not sure how we count that one, but okay.

I told Rep. Jeff Van Drew a few months ago he couldn’t vote no. it wasn’t an option. He voted no.

update: the chair ruled that Van Drew could not vote no, and they changed his vote to present. https://t.co/JBn52zlfbv

Jeff Van Drew: voted no on background checks. voted no on same-sex marriage, voted no on raising the minimum wage. Now he tries (and fails) to vote “no” on Pelosi.

All for a big tent party but what does this guy do for Democrats? https://t.co/yEnMpFz6lW

So Jeff Van Drew is going to be the dumbest member or the dem caucus.

Van Drew won a relatively narrow single digit race in the sprawling, southern N.J. district in November, one which voted for Donald Trump (R) in 2016, Kim Guadagno (R) in 2017, AND Bob Hugin (R) in 2018. His close-run victory came about despite dramatically outspending his Republican opponent in the general election.