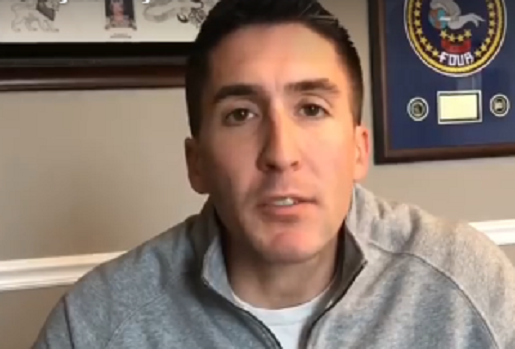 EVESHAM TOWNSHIP, N.J. — Freshman Democrat Rashida Tlaib of Michigan remained unapologetic on Friday after, while addressing a MoveOn.org event, she relayed the details of a conversation with her son to the assembled crowd:

“And when your son looks at you and says, ‘Momma, look you won, bullies don’t win,’ and I said, ‘Baby they don’t,’ because we’re gonna go in and impeach the motherf—–.”

Tlaib’s foul language earned her criticism from the Right (and from the Left, too, including from the new Democrat House Judiciary Committee chairman).

N.J. Assemblyman Ryan Peters (R-8), a Navy SEAL working out of Burlington County, insists there is nevertheless plenty of blame to go around in the escalating war of words between President Trump and his supporters in one corner and the radical Left in the other.

Peters released a web video on Friday making his case for a return to adult behavior and discourse.

“I can’t say I blame the Congresswoman,” said Peters, while describing Tlaib’s remarks as ‘disturbing.’ “She’s merely following the path of Donald Trump who’s the master of the name game, who constantly puts an insulting adjective before everyone’s first name.”

Assemblyman Peters is on the ballot in LD8 this year for what is expected to be one of the more hard-fought Republican defenses (he and his running mate Joe Howarth were narrowly successful in 2017 during the Murphy landslide).

The millennial veteran and attorney is also widely discussed as a possible U.S. House candidate for NJ-03 in 2020.