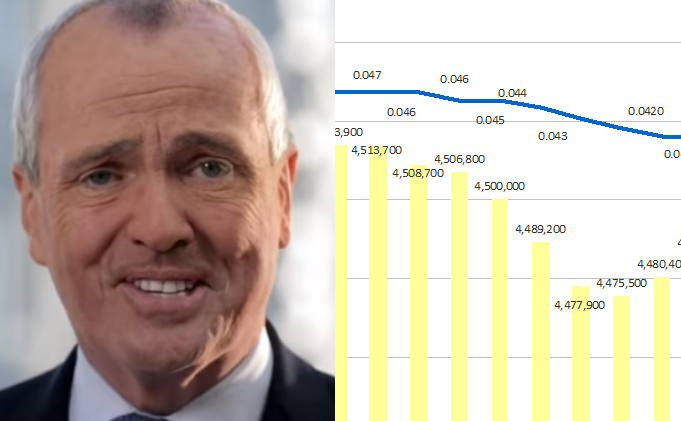 It’s the latest sign of trouble head for New Jersey at a time when the national job market continues to boom but fears of an economic slowdown are ramping up in some quarters.

Garden State Initiative (GSI), which also discovered that New Jersey gross income tax revenue was down 35.2% for December 2018 versus December 2017, said it’s time to worry. You can read their full analysis here.

“This has been a troubling week for New Jersey’s economy,” said Garden State Initiative President Regina M. Egea. “We’ve seen the slow job growth of recent months come to a full stop and state revenue falling well below projections. These two reports send a clear message to the Administration to avoid further policy shifts that would hamper job creation.”

But Governor Phil Murphy isn’t putting off more big policy changes. Not at all.

For example, just yesterday, he struck a deal to dramatically increase the minimum wage (to $15 for most workers by 2024), a move which is receiving criticism from members of the state’s business community to say it will hurt hiring as it has in other places where it’s been tried.

Governor Murphy has also refused to rule out another round of tax hikes ahead of his upcoming FY 2020 budget address in his endless quest to advance “fairness” in the state economy.

“As a small business owner, I understand how difficult it is to maintain employees’ jobs and benefits when we’re constantly faced with new taxes and expensive mandates from the State,” said state Senator Anthony Bucco (R-25) on Friday. “I have no doubt that the huge costs being forced on employers by Governor Murphy and the Democratic legislature will lead to reduced hours for workers, layoffs, and the faster adoption of automation technologies that are already leading to workforce reductions in many industries.”