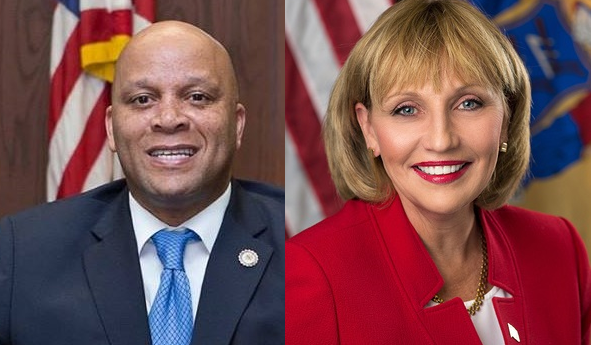 First, back in November 2018, he faced criminal charges related to a brawl at the Golden Nugget Casino (the complaints were ultimately dismissed at the end of February). Then the FBI raided his home; that story line is still unresolved. Now he’s being sued, and the plaintiff’s attorney is a very familiar name in New Jersey politics.

This week, Meredith Adele Godfrey filed a civil suit against the mayor in Atlantic County Superior Court seeking damages for alleged theft, conversion, and breach of contract. Her attorney is none other than Kim Guadagno, New Jersey’s former Lieutenant Governor.

Guadagno joined the law firm of Connell Foley as a partner back in April 2018 a few months after leaving office. She had served as a prosecutor prior to her elevation to sheriff of Monmouth County and, later, Chris Christie’s second-in-command.

The substance of the complaint concerns an alleged “close personal relationship” between the parties.

In Count One, Godfrey claims that she lent $5,000 to the mayor back in August 2018, a loan purportedly requested by Gilliam to “pay for an attorney for trademark advice regarding a tourism slogan in Atlantic City.” Godfrey then claims that the mayor refused to repay the loan. She’s now seeking the principal of the alleged loan in addition to judgment interest, costs of suit and attorney fees.