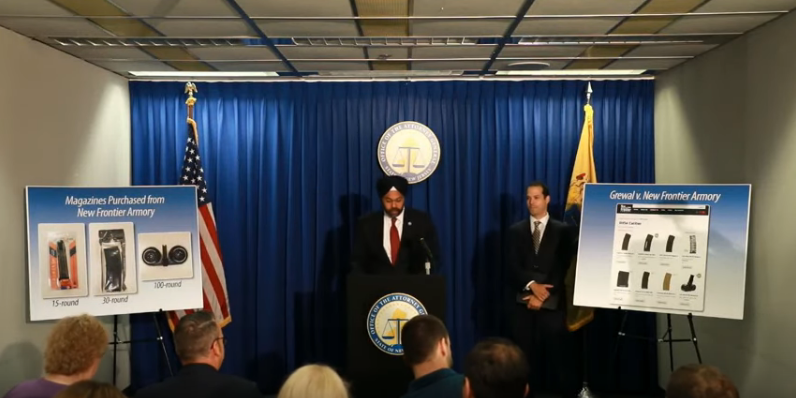 TRENTON, N.J. – Phil Murphy’s attorney general is cracking down on large capacity magazines which have been a target of the Democrat Administration’s gun control policy regime.

On Wednesday, Gurbir Grewal announced that he is suing a Nevada-based company – New Frontier Armory LLC – for alleging selling six large capacity magazines (or LCMs) to undercover state investigators. At least one sale involved a 100-round magazine.

“Despite being put on notice that their actions violate New Jersey law and being directed to stop, New Frontier Armory has continued to advertise and sell illegal large capacity magazines to our residents,” explained Acting Division of Consumer Affairs Director Paul R. Rodríguez. “By continuing to sell LCMs to New Jersey buyers, and failing to disclose that these weapons are illegal, New Frontier Armory has shown complete disregard for New Jersey consumers and for our state’s consumer protection laws. We warned firearms sellers that we would take action if they kept selling unlawful firearms and ammunition to New Jersey residents, and we are making good on that promise again today.”

Grewal said his office sent a cease and desist letter to the company on January 7, 2019 but the company allegedly failed to abide by the state’s request to abide by New Jersey law. He’s seeking stiff financial penalties, attorney fees, and an order barring the company’s LCM sales in New Jersey.

“Large capacity magazines are dangerous and have been disproportionately used in mass shootings, which is why they are illegal in New Jersey,” said Grewal. “We warned New Frontier Armory that we had zero tolerance for their sale of unlawful magazines in our state, but they sold a 100-round magazine to our undercover investigator anyway. So we are suing New Frontier Armory for its illegal sales, and we’re going to seek the maximum civil penalties. This lawsuit should be a warning to the industry: if you sell deadly and unlawful firearms or magazines into New Jersey, we’re going to take action against you too.”