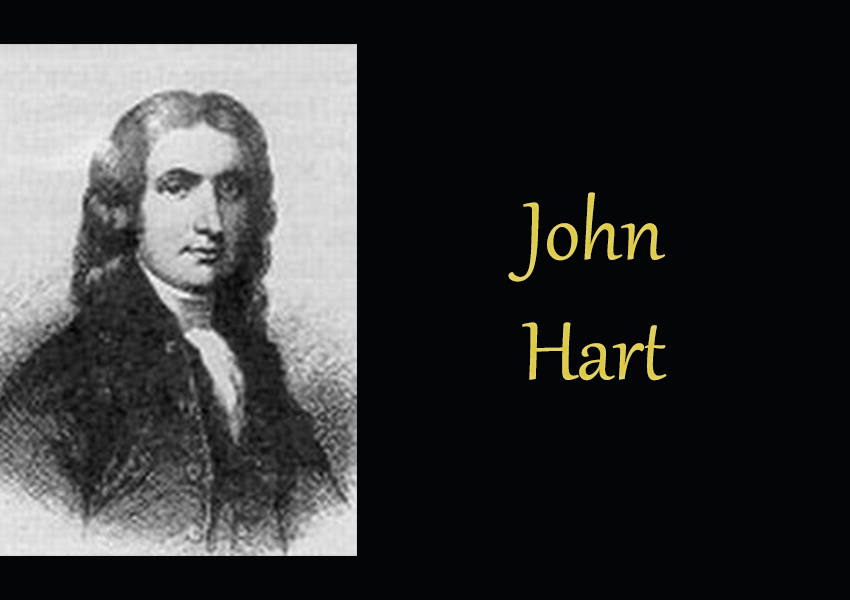 We’re continuing our pre-Independence Day look at each of New Jersey’s five signatories to the Declaration of Independence, Save Jerseyans. Our state’s founding fathers. Post #1 was devoted to the life and times of Abraham Clark.

Unlike his fellow New Jerseyan Clark, Hart didn’t live long enough to see American Independence. He died in 1779 on his Hopewell Township, New Jersey farm and you can still visit farmland named in his honor today [Note: Mercer County wasn’t formed from portions of Hunterdon County and others until 1838]. Prior to his death, he donated a portion of the farm to the local Baptist community which subsequently erected the Old Baptist Meeting House. Hart was buried there after he died.

During his exceptionally accomplished life, John Hart served in a number of different public posts including as a member of the Hunterdon County Board of Chosen Freeholders (see my note above) before joining the New Jersey colonial Assembly. He earned the nickname “Honest John” as a judge on what was known in colonial times as the Court of Common Pleas, an honor which I think you’d agree few contemporary New Jersey politicians could ever hope to earn!

In 1776, Hart had quite the year as did the rest of the new nation when he signed the Declaration and was elected Vice President of the newly-formed revolutionary assembly (also known as the “provincial congress”). Hart was eventually elected Speaker of the brand new New Jersey General Assembly among other positions (e.g. treasurer of the Council of Safety, a very powerful state authority during the war).

He also saw his fair share of wartime strife. When the British Army invaded Hunterdon County in December 1776, Speaker Hart was forced to go to ground in the nearby Sourland Mountains as British and Hessian troops pillaged his lands. Hart was able to return home only on the 26th after George Washington’s famous Christmas victory in Trenton.

Hart later volunteered the use of his farm to General Washington and his 12,000 men preceding the legendary June 1778 Battle of Monmouth.

Events took their toll. Worn out from advancing age and public service and plagued by painful reoccurring kidney stones (back then they were referred to as “gravel” stones), Hart exited public life for good on November 7, 1778. He died a mere six months later May 11, 1779 at age 65.

His May 19, 1779 obituary in the New Jersey Gazette was worthy of Hart’s life well-lived:

On Tuesday the 11th instant, departed this life at his seat in Hopewell, JOHN HART, Esq. the Representative in General Assembly for the county of Hunterdon, and late Speaker of that House. He had served in the Assembly for many years under the former government, taken an early and active part in the present revolution, and continued to the day he was seized with his last illness to discharge the duties of a faithful and upright patriot in the service of his country in general and the county he represented in particular. The universal approbation of his character and conduct among all ranks of people, is the best testimony of his worth, and as it must make his death regretted and lamented, will ensure lasting respect to his memory.

It’s a shame he isn’t as well-remembered as the likes of John Stockton.A few things are still named in his honor including Hart Avenue in Hopewell, Hart Boulevard in Flemington, Hart Lane in Ringoes, and Hart’s cave in East Amwell.