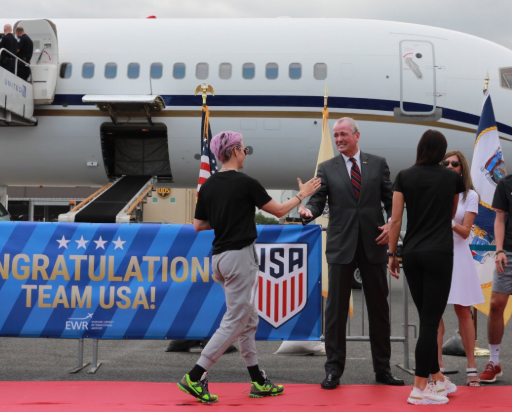 The virulently anti-Trump U.S. women’s soccer team – fresh off of their 2-0 weekend world cup victory – returned to Newark Liberty Airport on Monday and were greeted by none other than N.J. Democrat Governor Phil Murphy:

Proud and excited to greet the @USWNT at @EWRAirport on their triumphant return home from their record-breaking fourth World Cup championship. Your determination and spirit is an inspiration to us all. #OneNationOneTeam pic.twitter.com/ezU9bnKRvg

Governor Murphy shares the triumphant women’s team’s politics, but his own women’s soccer resume leaves a lot to be desired. He owns Sky Blue FC which made headlines last year for the team’s extremely poor treatment of its players.

New York City plans to host a ticker tape parade for the champions.

“I’m not going to the f—— White House,” Rapinoe, who has keeled during the National Anthem, declared back in June. “No f—— way will we be invited to the White House. [Trump] tries to avoid inviting a team that might decline. Or, like he did when the [Golden State] Warriors turned him down, he’ll claim they hadn’t been invited in the first place.“

Meanwhile, President Trump put enmity aside to offer the team his congratulations via Twitter:

Congratulations to the U.S. Women’s Soccer Team on winning the World Cup! Great and exciting play. America is proud of you all!