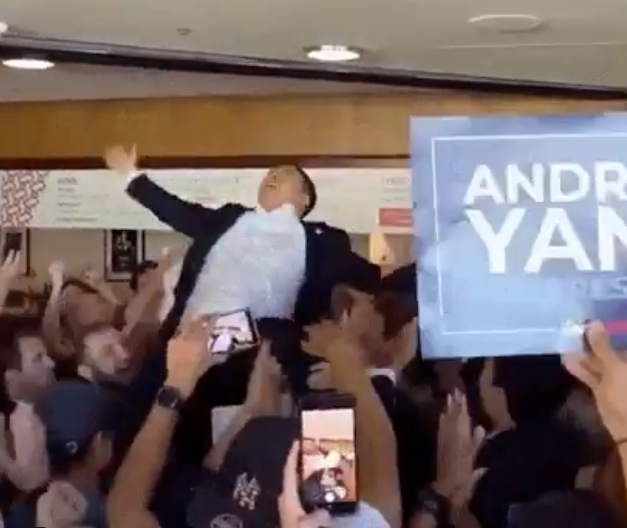 These zany Leftists (and their equally zany schemes) are always so predictable, Save Jerseyans! Both in substance and how they inevitable end up. Remember last week’s Democrat debate? When Andrew Yang announced a Publisher’s Clearing House-style plan to give ten families a grand total of $10,000 per month, a test run of his ‘basic minimum income’ program?

On Monday, Politico reported that the 40-something presidential hopeful’s campaign raked in $1 million in the three days following the debate announcement. He also got 450,000 NEW email addresses as supporters raced to enter the $10,000/m contest:

“The campaign said that over 90 percent of the email addresses are new, a huge expansion of the candidate’s email list. He also gained more Twitter followers over the course of the debate than any other candidate.

While some rivals on the debate stage laughed and rolled their eyes at the ploy, Yang’s campaign sees the “Freedom Dividend Pilot Program” as an example of why their internet-first campaign has pushed them to sixth place in the crowded contest.”

450,000 people. Tripping over themselves for a free payday!

That’s a lot of fresh juice to squeeze for an allegedly long-shot candidate.

It’s also validation that Yang’s basic minimum income plan won’t work. There are a few big reasons it’s never succeeded anywhere it’s ever been tried (click here for some info on that), and the overwhelming, irresistible and yes, PREDICTABLE impulse of many human beings to take full advantage of an open invitation to free riderhood tops the list. Too many people will kick back and collect the checks, and those who want to (or need to) keep working will quickly buckle under the weight.

Someone needs to clue in the Yang Gang: “the dead bird under the nest never learned how to fly.” I doubt they’ll ever get the chance to put UBI into practice, but it won’t end well for anyone if they do. That’s a certainty.