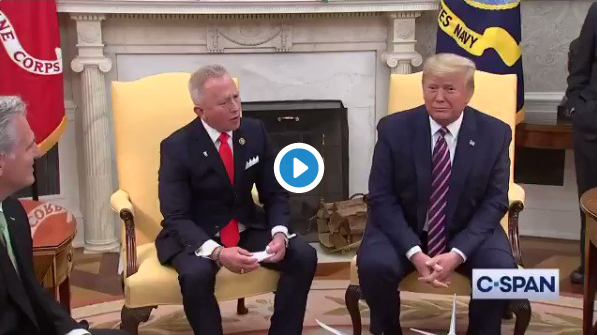 WASHINGTON, D.C. – He’s quiet no more, Save Jerseyans. Jeff Van Drew finally made things official on Thursday, huddling with President Trump and GOP leaders at the White House to announce his defection from the Democrat Party. The big roll-out comes after days of silence from the man himself.

“I didn’t leave my party, my party left me,” the 2nd District freshman Congressman told the press, sporting a Republican-red tie and  paraphrasing a famous Ronald Reagan quip on the day after he voted against impeachment articles. Trump in turn praised Van Drew and gave his endorsement.

“Jeff Van Drew should be commended for refusing to blindly follow Nancy Pelosi’s stampede of hate-filled Democrats over the edge of the political cliff,” opined NRCC Chairman Tom Emmer. “This is further proof that the socialist Democrats’ hatred of President Trump and obsession with removing him from office will cost them their majority next November.