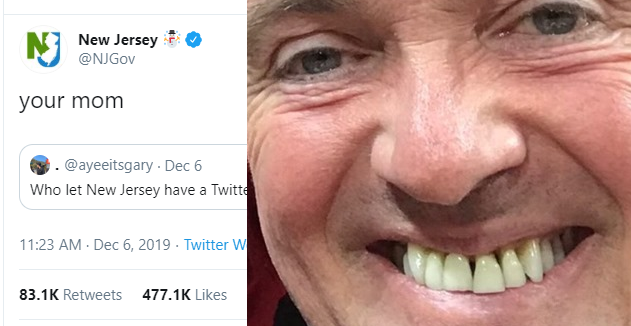 In case you missed it, Save Jerseyans, the Murphy Administration is taking a curious approach to promoting New Jersey with an official state Twitter account – @NJGov – launched in April 2018.

Many states have official Twitter accounts. That’s nothing unusual. The purported purpose of the account is to highlight state businesses, programs, and the Garden State brand generally. The real question is whether the actual @NJGov product is something most taxpayers would want to pay for or believe is remotely helpful for the state.

The most notable recent example of @NJGov’s tweets is the following December 6th gem which went viral (over 477,000 likes/loves as of this writing):

There’s a lot of that: stereotypical New Jersey jokes about pizza, the Shore, whether Central Jersey exists, etc., all in the tone of 20-something bro fist-pumping in a Belmar beach bar. Some of it is funny or at least innocuous. Some of it (see above) is border-line at best.

FYI – Murphy’s trolling-intensive account also spends a fair amount of time promoting New Jersey officials (in addition to Phil Murphy) who all happen to be Democrats:

reasons i’m proud to be born + raised in Jersey:

The account itself is spearheaded by two Murphy Administration comms employees: Pearl Gabel and Megan Coyne. Their work has been profiled by the Media (here’s another article). According to publicly-available information, Pearl is an aide to the governor earning $115,000 annually. Coyne is an aide, too, salaried at $45,000. That’s a lot of money for tweeting! Even if the pair does have a few other responsibilities (?) around the front office. Keep in mind that the Governor already has a separate press secretary.

Or an unflattering stereotype? And the Governor’s partisan allies? At a time when taxes are driving businesses and homeowners out of the state?

We’ll let you decide, Save Jerseyans.